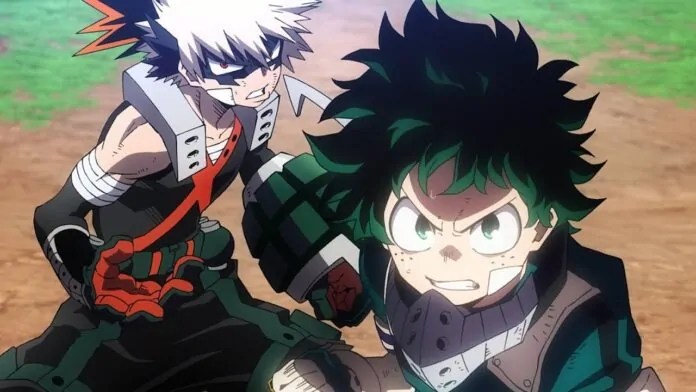 A teaser trailer from the film recently went online featuring Deku, Bakugo other UA students with the first look at story antagonist, Nine. The movie will open in Japanese theaters on December 20.

The newly introduced character, Nine is said to be “Ultimate villain” and was first foreshadowed in chapter 222.

Author Horikoshi previously teased the movie to be last one in the franchise and will use one of the concepts he originally planned to use in manga’s finale battle. He proclaimed that the second film will be more “Plus Ultra” than even the first one.

The early story Synopsis of Heroes Rising movie is as follows:

“A must-see story full of passion!! In this movie, Deku, Bakugo, Ochaco, Todoroki, and all the other members of Class A will make an appearance!

Even though All Might was admired by [many] all around the world, it was with a sad heart that he had to give up his hero role as the Symbol of Peace. Because of this, a dark force who was moving behind the scenes, a villain named Nine who can be considered the greatest villain thus far.”

Similar to My Hero Academia: Two Heroes, Kohei HoriKhosi will be heavily involved in project supervision and character designs.

Written and illustrated by Kohei Horikoshi, Boku no hero academia is a Japanese manga published in Shounen Weekly Jump.

Viz Media is publishing the English release digitally and print. Studio Bones adapted the same into three anime series, one movie and an upcoming season 4 in October. Legendary is producing a Live-Action.

The story follows Izuku Midoriya, who lives in a world where everyone has powers, even though he was born without them.

Dreaming to become a superhero anyway, he’s eventually scouted by the world’s best hero All Might and enrolls in a school for professional heroes.