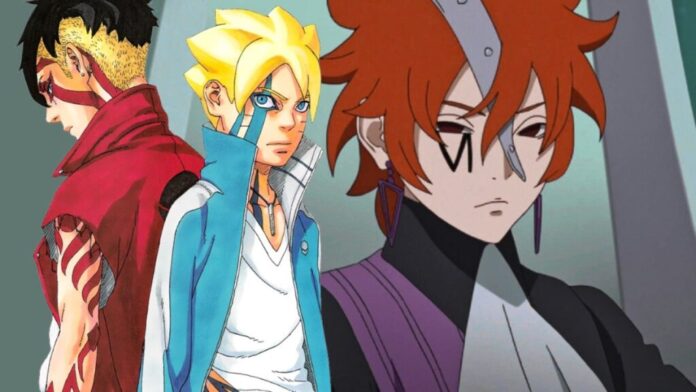 Boruto Chapter 63 will feature Boruto vs Code as per the last chapter’s end. The official Chapter 63 release date is October 20, 2021.

Finally, Boruto manga is resuming fights after that Big Isshiki fight in which Kurama died. The manga went on fillers and backstory but now it’s back on the action pace. Kawaki and Boruto together are about to fight Code, while Eida is watching them through her ability from some other place while Daemon is half asleep.

The Boruto Chapter 63 will release on time and there is no official delay currently. The official release date for Boruto Chapter 63 is October 20, 2021, and the release time for every country is 11:59:59 PM JST (Japan Standard Time). For UTC it will be 3:00 PM. (Just add the extra hours to this from your timezone)

Where can you read Boruto Manga 63? Once everything will release we will update you all as soon as possible, therefore bookmark this page to get the latest chapter updates. These speculations might happen in the upcoming Boruto Chapter 63, 64, 65, 66 and would be really interesting to see:

Boruto Manga Chapter 62 covers Kawaki vs Code’s fight, where Kawaki decides to leave Konoha by suppressing chakra and end himself against Code in return for saving Konoha and Naruto’s life. This fails as Code starts beating him and Boruto saves his brother. After this fight, Kawaki will have no choice to take Amado’s deal of the karma seal, which he will use to save Naruto’s life in the future against the God Tree Divine Chakra fruit which code is planning to create for Isshiki Otsutsuki’s will.

But how will they all retreat back home to Konoha as no one powerful is here to handle Code? Maybe Sasuke will figure something out or maybe Kashin koji will be back soon. Or maybe Eida will interfere soon. The new strong cyborg which is in the building phase might join soon too.

Boruto Chapter 63 will release on October 20, 2021. Stay tuned on Omnitos for the latest manga and anime updates. If you want to read it in English in the United States you may go to the Viz website and it is also available in Spanish on Mangaplus.