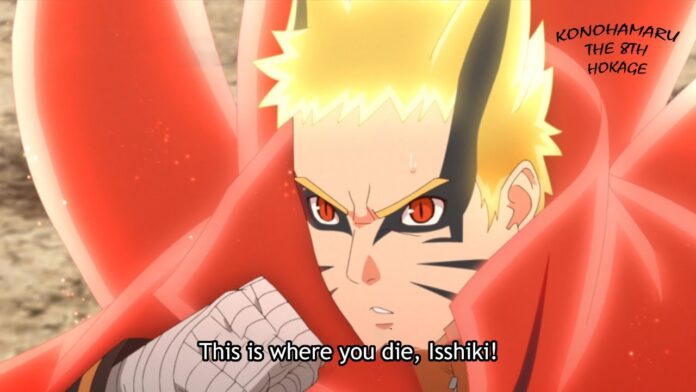 Boruto: Naruto’s next-generation anime is adapting the great manga story, people are way excited for the final fight of Kurama which Boruto Episode 217 will portray.

The Boruto Episode 217 English Subbed Release Date is September 26, Sunday, the release time is 10:00 AM UTC.

This is gonna be the biggest fight after the fourth great ninja war. Naruto and Isshiki both will be at loss, that’s for sure, we will be providing spoilers at the end of this post. The anime will now adapt Boruto manga’s chapter 52. You can see the live countdown above for every country for Episode 217 Live English Sub Release.

Boruto Episode 217 Where to Watch Online?

You can watch live Boruto Episodes officially from various sources like:

Everything here is for informational purposes therefore it is fair use. The focus is not on the anime content but to deliver the latest news. We highly condemn the use of illegal manga reading and anime streaming websites.

This post will contain major spoilers about Episode 217, please stop reading if you don’t want to get spoiled. The Episode 217 is titled as “Decision” In the last Episode 216 of Boruto Naruto’s next generation, Sasuke and Naruto almost got defeated by Isshiki, and Boruto’s hand was broken by Isshiki. Finally, Naruto who is ready to die fuses his chakra with Kurama to kickstart the risky Baryon Mode to fight Isshiki, at last of episode 216 we see the red aura burning up from Naruto’s body which is really immense.

You all must be wondering how does this Naruto new Form which Baryon Fusion Mode works? The answer is simple it is just like Sun’s nuclear fusion. In return Kurama and Naruto’s chakra are getting consumed, which is a lie, only Kurama’s chakra is being consumed.

Consequences of Fusion Mode by Naruto

Though the mode was able to weaken Isshiki in Boruto Episode 217 and drain him with a lot of energy, Naruto still was not able to fully defeat Isshiki. Also as Kurama lied, in actuality only, his chakra was getting consumed, his life force was getting consumed, Kurama bids a farewell to his old friend Naruto.

Naruto is still alive in the manga which is way ahead of anime, therefore he will remain alive for now, but Kurama will die soon.

What will happen in upcoming Episodes, Episode 218, 219 Spoilers?

Why Kurama will die in upcoming Episodes?

Yes, Kurama will die soon in upcoming Episodes as his life force is getting consumed in exchange of the immense power Naruto is using against Isshiki.

Will Kawaki be involved in this fight?

Yes, Isshiki will drag out Kawaki to this dimension tracking chakra link from Naruto.

About Boruto: Naruto’s next Generations

Stay tuned on Omnitos for the latest manga and anime updates. If you want to read manga that is ahead of anime in terms of story, you can try it in English in the United States you may go to the Viz.com website and it is also available in Spanish on Mangaplus. We hope we have cleared all your doubts regarding Boruto Episode 217. The latest chapter of Boruto Franchise is chapter 62.