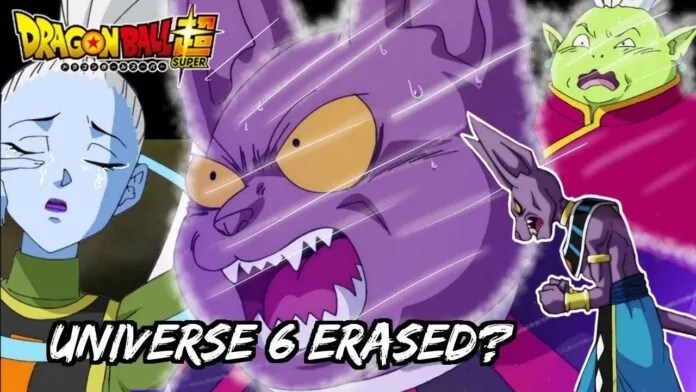 Hey everyone, Episode 116 finally got aired and we are moving towards Episode 117. Only 17 min are left in tournament of power while these 17 minutes may be equal to 10-12 more episodes. Here is the Elimination stats Chart by KenXyro:

As titles and spoilers of upcoming episodes are already out which had revealed many interesting facts like that we are going to have a universe get erased soon and a Universe 7 warrior will be a victim of the Secret moves by the Universe 4 warriors (Hidden ones may make their move).

In the last blog I talked about about the Universe 4 warriors and in this blog I will be talking about the possible universe which may get eliminated next. In my opinion there are only 2 universes which are at brink of erasure, that are Universe 2 and Universe 6. Here are the reasons why they are next!

As we all know that Kelfa is finally eliminated making 2 eliminations in straight which resulted – only 2 warriors are left from universe 6 which are Namekians Pirina and Saonel. Even though these Namekians may be more evolved than universe 7 Namekians, there is no possibility of there survival against Piccolo and Gohan’s dual combo fighting skills. Do think what will be the Beerus’s reactions to this as his brother Champa will get erased!

Moving forward we have Universe 2 which has 5 members left but as the spoilers of Episode 117 already revealed that all of the Universe 2 warriors are going up against Universe 7’s Android 18, 17 and also Goku, there is slight chance that the Android duo may be able to eliminate all of them in upcoming episodes.

As we saw in the past episodes how they were able to make 3 direct eliminations from Universe 11’s Pride Troopers in a single episode, there are very much chances of Universe 2’s elimination to be the next.

In dragon Ball Super Episode 117 we will see Androids in action for protecting Goku from Ribrianne of Universe 2, as his energy is drained again, therefore universe 2 including Ribrianne may get eliminated soon.

Vegeta tries to use Ultra Instinct by copying Goku and acts unconsciously but he fails and gets attacked by Katopesla. This also indicates that soon Vegeta too will get Ultra Instinct, An image of Katopesla Police of Universe 3 who will attack Vegeta is shown below:

Title: ‘Tragedy Discloses in on the Vanishing Universe!’ Summary: There is no synopsis available right now but it seems like the Universe of Ribrianne (Universe 2) will get erased according to the title above. This is what everyone is wishing for since the beginning of the tournament.

Title: ‘A new sacrifice from Universe 7! Universe 4 gets serious, and universe 7 becomes the victim of it!’ Summary: There is no synopsis available right now, but as from the title we are going to witness the Invisible warrior of Universe 4 in action and the victim will be a fighter from Universe 7.

Thanks for reading, make sure you all subscribe to my blog’s notifications.