My Hero Academia anime is known for being one of the best ongoing modern shounen series at the moment in many aspects. MHA does things well in terms of character development, fights, designs, and concept. And because of the popularity of the shounen series, it naturally got as huge as it did. So, are you all excited for My Hero Academia Season 5, Episode 1?

My Hero Academia Season 5 is finally upon us. Let me just say, god it’s good to be back! I’m sure most of you would be like, “Oh how I miss these wannabe heroes.” Now, you must be wondering about the release date, updates, and where to watch My Hero Academia Season 5, Episode 1. This article covers all those things and also some spoilers.

Where to Watch Episode 1?

You can watch the show My Hero Academia Season 5 on Funimation, Crunchyroll, and Hulu. These are some pretty good sites and are streaming outside of Asia as it airs, and an English dub from Funimation will premiere later. Medialink licensed the series in Southeast Asia and South Asia and is streaming the series on Netflix, Viu, Bilibili, WeTV, iQIYI, and other regional streaming services.

The MHA Season 5, episode 0 released on 27 April 2021. If you might have already watched it, then you might be thinking about what is wrong with the animation. We all noticed it, this episode was actually episode number ‘0’ and not episode ‘1.’ It was probably a last-minute call from the production company to make the first episode as an anime original. The reason why the artwork looked a little bit inconsistent is because of that. Let’s wait for My Hero Academia Season 5, Episode 1 to see the old animation return. Overall, it was not that bad as we got to see the re-introduction of the students and got some explanation about the things that happened in the last season. I know that we were all so hyped about MHA Season 5 mainly because of the way season 4 ended. We were definitely expecting a banger entry, but do not worry because the real thing starts the next week.

This season has opened up with an episode ‘0’ which is quite confusing and another one to file under # JustAnimeThings. So if you happen to miss out on this episode, there is not much missing context overall story.

The episode is primarily just another nice reintroduction to the cast of class 1-A and their powers. However, that doesn’t mean there isn’t fun to be had as we get to see this ragtag group of heroes. Also, we get to see our heroes training get up to all sorts of shenanigans. So, without further ado, let’s dive into My Hero Academia Season 5, Episode 0! 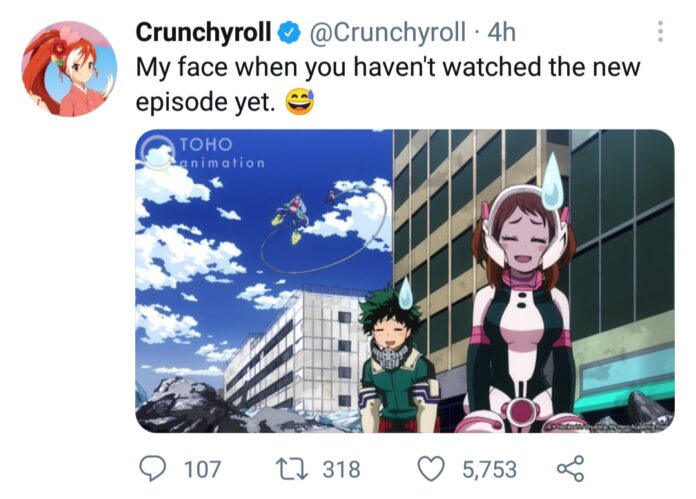 My Academia Season 5, Episode 0 opens up in U.A with class 1-A, talking about the ending event of MHA Season 4. Endeavoring hawks doing their thing and being badasses, taken down the high-end Nomu. In case you missed it in all of its glory, it shows a highlight reel of the episode. Now there is a nice little moment where in the midst of talking about an endeavor between Moneta and Shoto. Moneta turns to Shoto and says, “So you can be proud of your dad eh?.” To which Shoto replies, “Yeah that’s true,” Endeavor made his little boy proud!

Later as class 1-A is about to start their lessons, we are introduced to the premise of this episode. As an alarm goes off, informing class 1-A that there are fake villains in the school and it’s their job to deal with them. Class 1-A suits up to the rocking tune of hero A, as Deku exposits the premise of the hero world once more.

On arrival at the scene, class 1-A split into teams, the reconnaissance team, the rescue team, the disaster relief team, and the team Bakugou. Within these teams, each character shows off their unique powers in their own way. We also get some cool moments like Shoto using his ice wall again and Mina, Uraraka & Sero do an awesome team-up move. But, just when it seems like class 1-A has everything under control, Nejire & Tamaki show up playing the role of villains.

Later, a conflict breaks out between class 1-A & a big tree, and so a battle ensues. Tamaki proves to be a bit more of a problem, that is until the team Bakugo rides up in a sports car. That’s right, Bakugo, Kirishima & Kaminari hijack a car, forming a straight-up drive-by on Tamaki. While Kirishima headbutts his fathom compadre and Bakugo’s pure unrelenting tenacity utterly terrifies Tamaki.

Class 1-A completes their disaster simulation training with flying colors! Not before Bakugo blows up Tamaki for hesitating, believing he wasn’t taking their fights seriously. We get to see Bakugo’s some rage here!

By the end of the My Hero Academia Season 5, episode 0, pretty sure looks like Bakugo kills Tamaki. However, there is an after-credits scene where we see right after their fight. High-end Endeavour and Hawks were confronted by none other than Dabi! The last shot of the episode is a flash of Hawks in a dark alleyway, coming face-to-face with Dabi. And that’s My Hero Academia Season 5, Episode 0!

If you have watched the preview of My Hero Academia Season 5, Episode 1, then you should already know that it’s going to be interesting. This episode is going to have the title called ‘Vestiges,’ and it will be releasing on the 3rd of April which is Saturday of the next week.

We get to see the aftermath of the Nomu fight and Dabi is going to show up and gets chased away. We also get to see the beginning of the Dabi and Hawks plotline, some keeping up with Todoroki’s content. We may also end off with the true beginning of Deku’s dream in My Hero Academia Season 5, Episode 1. 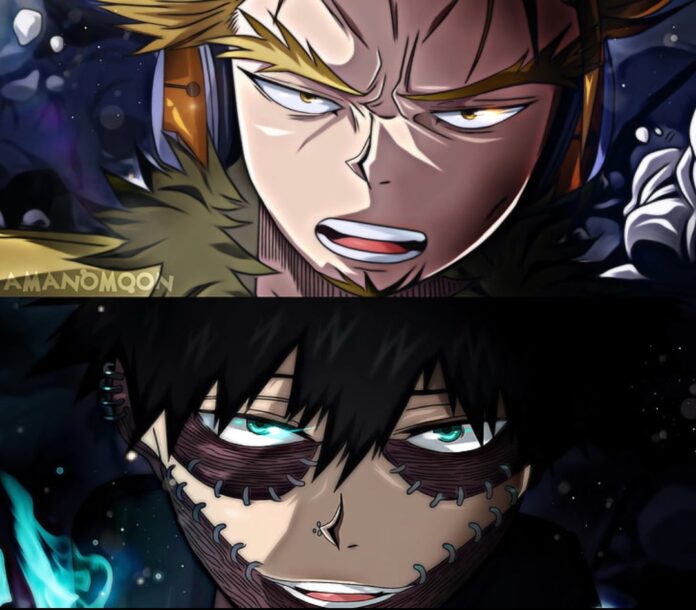 We have information on My Hero Academia Season 5, Episode 1. You may think that well wouldn’t it be spoiling the previous episode 0? The answer is a big “NO” since the story is completely original to the anime and episode 1 is adapting the manga. If you are not aware of the fact that the final arc of MHA season 4 never concluded, so the story will continue from there with My Hero Academia, Season 1!

It’s not going straight into the training arc that we’ve seen in all the promotional material, where class 1-A & 1-B trains together. Also, they are including Shinzo who was previously not a part of the hero course but fought in the sports festival in MHA Season 2.

The description of the episode goes as follows. “The last time we saw Endeavour and Hawks who had won against a terrifyingly strong high-end Nomu but then the one that appeared in front of Endeavor who got himself beaten up is a league of villains Dabi. So how will Endeavor and Hawks get away from this crisis?

On the other hand, one-night Izuku saw a weird dream. The one who appeared in front of Izuku that couldn’t speak was ‘One For All,’ and the other one called ‘One For All’ as a little brother.” 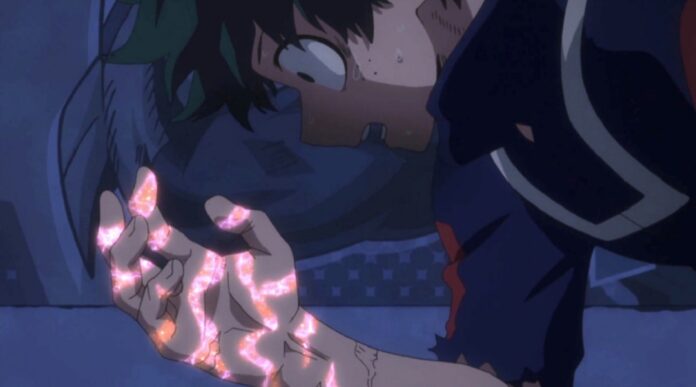 If this sounds awfully familiar to the final episodes of MHA Season 4, that’s because it is. The arc has barely any more to go when we’ll take no more than two episodes at maximum to finish. Deku also saw the other previous users of ‘One For All’ lined up next to him if you remember. This is all so close to our eyes but of course remember this is just My Hero Academia Season 5, Episode 1, so this won’t be the first thing you see.

Also read: Is MHA Manga coming to an end?

MHA Manga: How many chapters will be covered in the series?

My Hero Academia manga has released 18 books, 29 volumes so far. Horikoshi, the creator of the manga MHA is working on more strips to build more chapters. The series is so popular worldwide its already spawned an anime, which has received high praise from fans of the manga.

For a few days, you all might have heard the news circulating on the internet about the manga. Is the MHA manga going to finish? It is unfortunate news that yes, My Hero Academia manga is coming to an end. 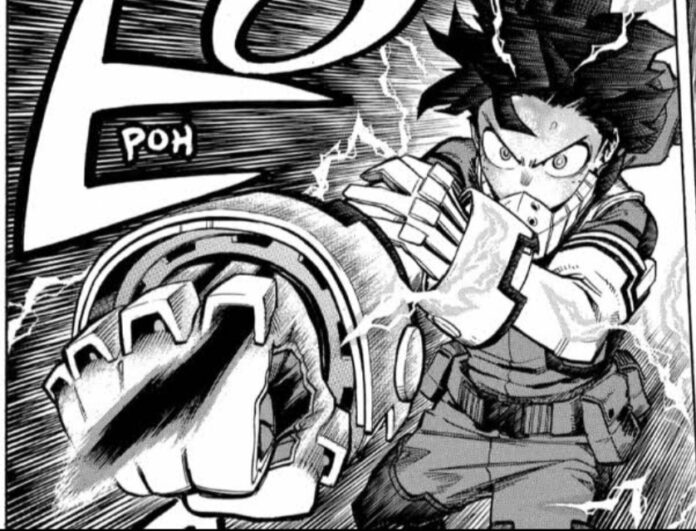 It’s officially confirmed by Horikoshi in the Jump Festa 2021 super stage event. Now, the question arises, what about the series? Is MHA is going to end as well with MHA Season 5? It all depends on how many chapters are going to be covered in My Hero Academia Season 5.

The latest chapter of MHA manga is confirmed to be April 4th, 2021. This means there is a hunch we might get My Hero Academia Season 6, and MHA Season 5 is not the end! I’m pretty sure the last episode of MHA Season 5 will be a cliffhanger, as we’re again left to wait for season 6. What do you think?

With that being said, this is all we know so far about My Hero Academia Season 5, Episode 1 folks! Also, check out its latest preview.

Boku no My Hero Academia: About the Anime

My Hero Academia aka Boku no Academia is a well-balanced story for the most part. The story revolves around a society filled with quirks, people born with special abilities except for the main character, Izuku Madoriya.

A world where professional heroes are highly respected and the government pays them for their services. Heroes are in peril & lives are at stake, and that is when the series takes a turn of events.

Thanks for reading My Hero Academia Season 5, Episode 1: Possibilities, release date, when? For more updates & news, stay tuned to us.