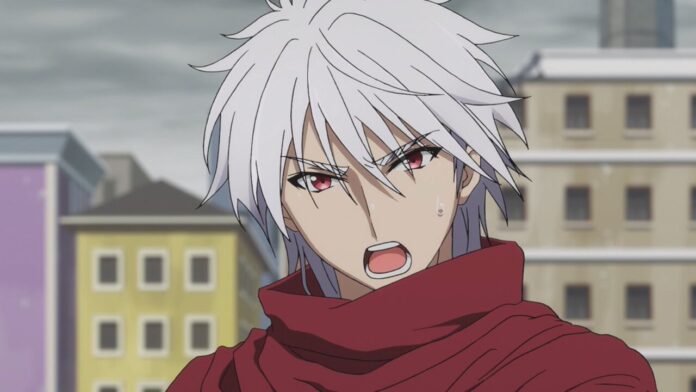 Howdy everyone, Plunderer Episode 9 Spoilers, Release Date, Where to Stream everything is here. Keep reading because this post contains many spoilers and the latest news about the plunderer episode 9 release date.

The last episode of the anime winded up with everyone getting a glimpse of the demon of the abyss. Even though the monster was a Helicopter but still, going with the plot of the anime, it is still a demon, lol.

It appears like the makers continue naming the next chapter as the title of the current episode. This post contains tons of spoilers for Episode 9 of Plunderer and also its release date, so keep reading.

Lieutenant Jail, is on a mission to capture Licht Bach, one of the legendary Aces. While on the mission, Iron Jail comes across Linden Town that is wrecked as hell and only has a single survivor, who is an army troop.

The surviving soldier tries to warn Jail about the demon of the Abyss. Iron Jail doesn’t believe the soldier and continues with his mission. In another town, Iron Jail comes face to face with Licht Bach.

Iron Jail challenges Licht to a drinking competition to get the information out of Bach. Everyone looks calm and happy but not for long. The lake of the town turns black and both Jail and Bach realize the danger and warn everyone about the danger.

The army troops surrounded the town within an instant on Jail’s order. Episode 9 of Plunderer finished with the demon appears from the black lake.

To be honest, referring Helicopter as a demon is quite funny. But, since flying or inventing objects that can fly is forbidden in their world, it all adds up.

But the question is, what is a helicopter doing in the town? Why was there a helicopter in the abyss? Who is operating it? What does Licht Bach know about it? Let’s see what all twists and turns will take place in Episode 9.

Episode 9 of Plunderer is set to be released on Thursday, 5 March 2020. We all know that the makers drop every episode on Thursday.

The time of the release is 01:05 JST. Furthermore, episode 9 is titled “Plunderer”. But as we know, the title of each episode gives a clue about the next episode. So, basically we will get to see Jail die or maybe not, who knows?

*WARNING- Before continuing any further, you should know beyond this point there will be a lot of spoilers for Episode 9 of Plunderer. So, if spoilers bother you, you might want to stop here.*

Without further delay let’s begin with the spoilers.

Episode 9 will feature a battle between the Helicopter aka demon and the humans. Licht and Jail will try to defeat the demon of the abyss but won’t be able to do any harm. To increase their problem, Althing will appear and will try to take the demon back into the abyss.

For all of you who don’t know what Althing is, Althing is the black hands that take people to the abyss. Althing will try to attack Licht because he will get in the way of Althing. Licht will attack Althing as well.

The jail will stop attacking the Helicopter aka demon as attacking Althing is in the way.  In their world, attacking Althing is considered a crime. But, to help Licht he will try to play a fool and will say that he can’t see without his glasses. The punishment for such a crime is court-martial.

In the later parts of the episode, we will see that the Helicopter is operated by a child. Sonohara will appear the army troops and will kill Jail. Sonohara is a Legendary Ace with a massive count of 32000. Just to let everyone know the count of Licht Bach’s ballot is 5400 and the count of Iron jail is 12500.

We might also get to see a battle of counts between Licht and Sonohara. Also, in episode 9, the real name of Licht will be revealed, which is, Rihito. It is also revealed that Rihito aka Licht is a colonel and ranks higher than Iron Jail Episode 9 will reveal a lot of secrets about Licht aka Rihito and his past.

All episodes of Plunderer including Episode 9 are available to stream on Funimation and other official streaming platforms. We highly condemn streaming anime and reading manga on unofficial illegal websites.

For the latest anime and manga news, stay connected to us. Also, check about the Demon Slayer season 2 update.