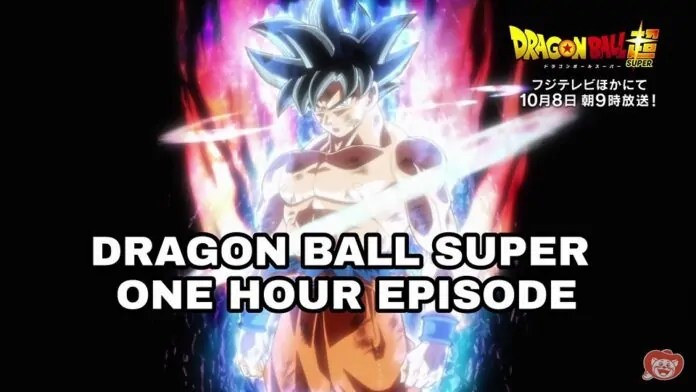 So this month was a delight with five episodes of our amazing show. Though I doubt the coming month will be the same. Let’s just hope quality covers for the quantity. Thanks to KenXyro and Herms 98 for the information. We have official Tweet from Funimation in this article!

A few days ago we were reported with the news of both One Piece and Dragon Ball Super getting 1-hour specials in October. In One Piece, Luffy will take on Sanji on October 1. Which means there will not be any episode of Dragon Ball Super airing on the first Sunday of October.

Don’t get sad because, on October 8 (October 7 for some time zones in the world), Dragon Ball Super fans will witness a match of Jiren ‘The Gray’ from Universe 11 with our hero Son Goku! It is then Goku will take his power to new heights which is most likely and reveal his new transformation! We already have the first look of his amazing new form. Official Tweet from Funimation about the episode:

The name is unknown, but Goku’s eyes become Silver as he is surrounded by both majestic blue AND Purple-red aura! It is worth mentioning that the hyped Dragon Ball and One Piece specials will not be crossovers, instead, it seems they will be two episodes from each anime series aired back-to-back.

The best guess as for why this is happening is because if the long awaited fights which not to mention could be the climax of the whole arc. Luffy vs Sanji and Goku vs Jiren are major fights in each respective series, so I wouldn’t be surprised if that happened.

With Jiren set to finally fight Goku, fans have already prepared themselves for the Saiyan unleashing his new transformation during battle. Goku has been waiting to fight the Universe 11 champion for so long, and he may pull out his ‘Limit X Breaker’ when he is pushed back significantly.

If Goku’s new transformation debuts during his battle with Jiren, then it will be aired on October 8 when the Dragon Ball Super one hour special is supposed to be placed. But I doubt that would be the case given there is a chance fans will see Goku’s new form briefly before the anime airs in October.

Rumors began circulating within the anime fandom that Dragon Ball Super would bring out Goku’s transformation on September 24. Again this isn’t one hundred percent accurate as there is no official confirmation. The anime’s 108-110th episode may force Goku to take on his new form in its final moments before it goes on a week-long break.

Official Video of the new form and Crossover (Source TOEI)

Thanks for reading this article!