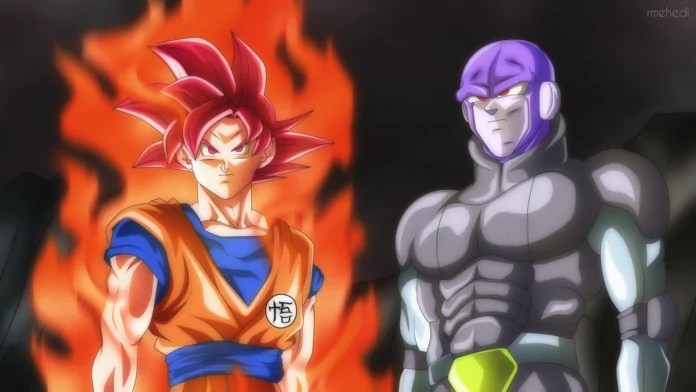 The Return of Super Saiyan GOD in Dragon Ball Super Episode 104! Goku will team up with Hit to fight the Pride Troopers of Universe 11.

This looks like it could be the best episode of the Tournament of Power to date! We saw some real power levels in the preview. Let’s break it down.

To begin with, the first shot that we get is Hit’s. and he doesn’t seem to be in a perfect position. The jump scans did tell Dyspo does come up with a method to counter his time skip so may be that is what it is.

It just seems that he is being attacked by some and then we have Caulifla’s image with a frame color change which might depict, some serious trouble. But then we have Goku blocking Dyspo’s attack almost effortlessly. We have a clear idea that Dyspo can not stand power attacks. He might have super speed but there is no way he can have both of speed and power.

The question here is why did Goku choose to go God and not Blue? The Downside of Red of course is it’s instability meaning Goku can’t maintain it for a long amount of time. While Blue is stable but consumes a large amount of energy.

As far as official statements go, Goku himself said it, Super Saiyan Blue is the power of the God form mixed with the Super Saiyan form. Which in a simple sense means Blue is just a part of Red. Though Blue has more Strength!

Goku using it for a person with super speed means Red might be a less powerful but quicker version of God league. Of course, there is Ki leak but he is effortlessly stopping an attack from Dyspo which seemed would have done great damage to Hit. I think Hit would be saving one of his team mates while he is fighting with Dyspo that would actually explain the fact that Hit the legendary assassin is taken into corner.

Kunsi is going to join into the fight and he seems to have a wired type of weapon. of course something he can create. Hit is seen to avoid that thing, so we know that is so not good for health. Goku in his God form is keeping up with Dyspo pretty good and Hit should be able to take down Kunsi there is no way two of the universe 11 knows to counter time skip! Comm’on it took 1 episode to take more than 50% of the team!