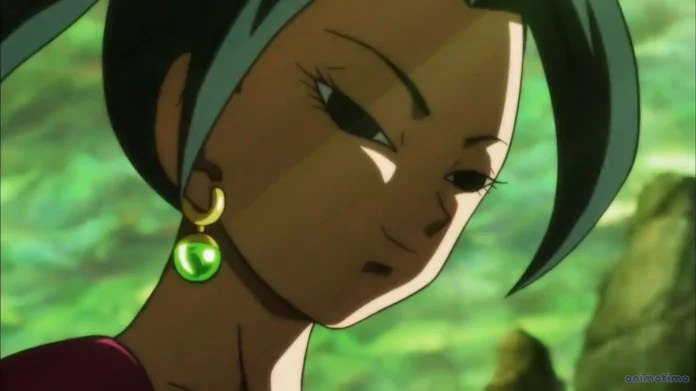 Dragon Ball Super episode 113 just aired in Japan, it was intense as we saw Goku and Caulifla battling and later Kale joined the battle as well. Possibility of Birth of Vegito just increased!  Anyway, here is the episode:

Today’s episode was mainly focused on Goku, Caulifla and Kale and it was really awesome. Dragon Ball Super episode 114 is titled Explosive! Birth of a new warrior, and as we already know from the spoilers that were released last week, there’s going to be a fusion and it was recently confirmed that Caulifla and Kale were going to fuse with Potara earrings. That fusion was revealed in the next episode preview.

The fusion warrior’s name is Kefla (Kefura) and as we already know, fusion warriors are extremely strong. Take Goten and Trunks for example, they were not able to lay a finger on Super Buu in their normal and super saiyan form, but when they fused, Gotenks was able to overpower Super Buu in his unmastered Super Saiyan 3 form.

That alone explains that how powerful Fusion actually is, and that was the fusion dance, according to Old Kai, he mentioned that Potara is even stronger than Fusion Dance, take Vegito for example.When Super Buu absorbed Ultimate/Mystic Gohan Goku and Vegeta were easily overpowered but they used Potara, Super Buuhan was no match, and from the preview of the episode 114 they just used Potara.

Dragon Ball Super Episode 114 preview, confirmed one major thing, that Potara is allowed in tournament of power just because the Omni Kings may say that to be ‘neat’.

Caulifla and Kale uses Potara earring to fuse and the fusion warrior Kefla/Kefura is born. According to the rules items are not allowed in the tournament of power but as Master Roshi used the bottle to seal away some warrior and throw them out of the ring, it was allowed because Zeno-Sama thought it was neat and that maybe the same reason Potara is allowed BECAUSE IT IS NEAT.

While fighting Goku Ultra Instinct, Jiren didn’t even use his full power at all, and as we already know Jiren is hiding is real power, and it will be hard to beat Jiren even in Ultra Instinct. So, birth of Vegito just got possible,we may need Vegito to beat Jiren!

Now let’s get back to the main topic, one of the strongest character might be returning in the tournament of power, yes you got it right, I’m talking about Vegito.

As we saw in DBS episode 114 preview that Potara is allowed, this leads me to believe that we are probably going to see Vegito, there are less than 28 minutes left in tournament of power, and Goku and Vegeta’s potara fusion- Vegito won’t last more than 5 minutes as they are really overpowered and potara earring don’t work well on them, we saw that while Vegito was fighting Fused Zamasu.

I know it’s not very Saiyan like but when the future of your universe is on the risk, they might just fuse to beat Jiren. And that’s it for my post, stay tuned for more posts and updates on Dragon Ball Super. Make sure you subscribe to our blog notifications.