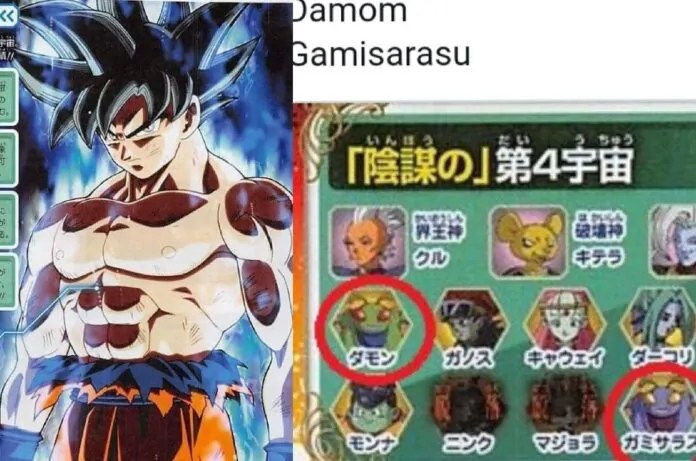 We have some breaking news here! This might be something that was given not much attention but actually might be a big deal. The two hidden warriors of universe 4 have now been revealed. They are in fact twins!

Their names as translated by Ken Xyro in twitter are Damom and Gamisarasu. They surprisingly resemble bugs, could they be tiny micro organisms? I mean it’s something that could be just fair. Some rumors were one of the hidden fighters will be coming out of the stage itself. So given they are twins they would probably share the same fighting and surviving abilities.

Cunshee is that blue colored Universe 11 warrior, things are actually getting exciting now when only the best fighters are fighting on the world of void. Cunshe is marked as eliminated in this but Dyspo is not.

There is another thing to notice, Cunshe is marked as eliminated in this but Dyspo is not. Looks like Dyspo might survive Hit and Goku’s tag team. Though he looks really scared seeing Goku, but well who isn’t excited to see the dream team?

We finally have the something we have been waiting for a long time now! Goku’s new form! The Warrior with his silver eyes! Damn, he looks Dope! Not a long ago we got the Jump scans for Goku’s new form visual, a front facing visual to be specific.

He looks angry and confident at the same time. His shirt is ripped apart which may make us safely assume there is a lot of intense fight that is on its way. It does seem he has the Blue aura but a better version of it. Here are a complete analysis and all the things we know about this form till date.