Life Lessons From Uramichi Oniisan, an upcoming Japanese comedy manga series created by Gaku Kuze. This series is a somewhat tragic and ironic story about adulthood. The show follows the routine life of Uramichi Omota, who is a gymnastic instructor for a popular children’s show called “Together with Maman”.

The English translation for this is “together with mom”. The reality is shown in a very beautiful way and this is what makes the show different from all others. Often the smiling faces have hidden misery behind their upbeat selves. We will see further expectations from Life Lessons With Uramichi Oniisan Anime.

Uramichi can be called a celebrity for being a host of such a popular show. Being the host for such a show which is meant for children, he can’t be sad on screen. He always has to be cheerful. Let’s have a look at the character of the show. 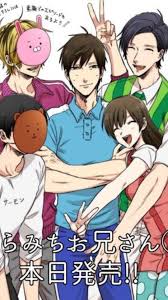 Uramichi is the lead character of the show. He is 31 years old and hosts a popular children’s show. he is also very popular among the children. Uramichi is going to be voiced by Hiroshi Kamiya. Hiroshi previously voiced Captain Levi from Attack on Titan.

Uramichi feels utter despair but doesn’t quite show it on the face. He is very good at hiding his pain. But he is not able to do this every time and sometimes he says things on the show that are not appropriate for children’s. He is an adult who is crushed by societal pressure. He lives an unhealthy lifestyle and also drinks smoke a lot. Expectation from Life Lessons With Uramichi Oniisan Anime

Iketeru is the support character for the show. He is one of the five hosts on the show who perform things alongside Uramichi. He takes all his time to learn something which he doesn’t know. In past, he used to be a musical actor before coming on to this show. He sings melodies to teach kids simple lessons in a very easy way. Often he and Uramichi are made to wear some ridiculous costumes to tell kids about germs, or other such things. He is getting voiced by Miyano Mamoru, who also voiced Light Yagami in Death Note.

Mitsuo is getting voiced by Yuichi Nakamura. He plays the role of bear on the show alongside Uramichi. Mitsuo is a relaxed individual and one of the sanest people from the entire cast. He is a calm and composed guy but fears Uramichi. He releases his frustration on his cast members so Mitsuo rarely takes off his bear mask and he doesn’t have to make eye contact with Uramichi.

Utano is one of the female characters of the show. She is also the lead female character and was a former singing idol who due to bad luck ends up here and is a singing instructor on the show.  in front of the camera Utano is very cheerful and lovely to watch but when the curtains are drawn off the reality is quite opposite. She is often depressed thinking about his marriage. Utano is getting voiced by Mizuki Nana, popular for playing Hinata in Naruto.

The show was supposed to start airing in July 2023 but due to some unavoidable reasons, it got delayed. The publishers of this manga are Ichijinsha’s banner. The distribution work in the U.S. is done by Kodansha.

Till now everyone is waiting for its final release. Already it has won many hearts and also looks interesting. Do tell us your thoughts on this show.