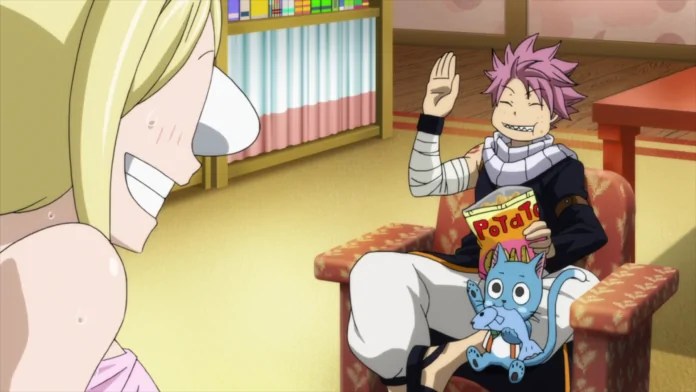 Last Episode of The Fairy Tail’s Final Season was very emotional to the viewers with Fairy Tail Guild reuniting once again. This gave us the much awaited reunion we were waiting for. Subscribe to our Reddit Community for latest updates.

Fairy Tail Episode 285 is set to release on 25th November, 2018 (Sunday). What do you think will happen in the next episode?? Do let us know in the comment section.

Spoilers/Synopsis Ahead!! Stop right here if you don’t want to be spoiled.

As all the members are doing some work, Natsu and Elfman starts a fight which will cause a ruckus between the members, and will be immediately stopped by extremely intimidating Erza, telling everyone to concentrate on their work. Levy will declare Erza the new and 7th Guild Master and right then Mest Gryder will make an appearance and will warn everyone that they need to save Makarov.

It is also Expected that this episode will reveal the hidden secret of the Fairy Tail Guild when Erza will be taken to the underground chambers right beneath the Ruins of the guild hall to which Only Guild Masters have access to. Mest Reveals the greatest secret of Fairy Tail “Lumen Histoire” to Erza.

Lumen Histoire is actually the body of Mavis Vermilion encased in a Lacrima. Makarov refers to it as the “ultimate weapon” of Fairy Tail.

Much to their surprise Natsu and his friends accidentally reveal themselves, having been following Mest all along.

Mest will transfer his memories to all of them, revealing his past, how he went to Magic Council on Makarov’s request to infiltrate the Magic Council for information about the western continent to the revelation about the future invasion of it by the Alvarez Empire, which Makarov left for to protect his family.

The Next Episode is expected to be very interesting stay tuned for more updates.