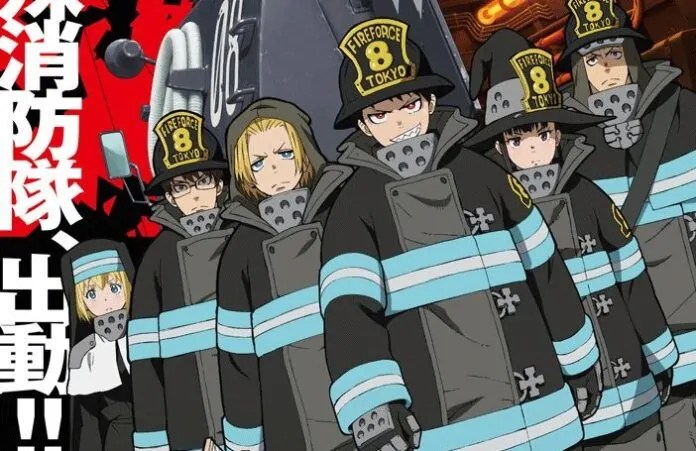 A new key Visual of the anime “Fire Force” can now be viewed on its website. Unlike the first visual, the new key seems to be character packed featuring the whole main cast.

The anime is scheduled to premiere on July 5th, 2019 along with other big titles like Dr.Stone and DanMachi Season 2.

The anime will begin its broadcasting starting from July, 5th on MBS’s Super Animeism programming block.

Year 198 of the Solar Era in Tokyo, special fire brigades are fighting against a phenomenon called spontaneous human combustion where humans beings are turned into living infernos called “Infernals.”

While the Infernals are first generation cases of spontaneous human combustion, later generations possess the ability to manipulate flames while retaining human form.

Shinra Kusakabe, a youth who gained the nickname Devil’s Footprints for his ability to ignite his feet at will, joins the Special Fire Force Company 8 which composes of other flames users as they work to extinguish any Infernals they encounter.

As a faction that is creating Infernals appears, Shira begins to uncover the truth behind a mysterious fire that caused the death of his family twelve years ago.

The anime will be handled by the David Production Studios, the same Studio credited for animating JoJo Bizarre Adventures anime series.

Streams -Where To Watch Fire Force?

As per now, Funimation is the only one who officially has acquired streaming rights.

Fire Force is a Japanese manga series written and illustrated by Atsushi Okubo.

It is published by Kodansha and has been serialized in the Weekly Shonen Magazine since September 23, 2015, with the chapters collected into a total of fourteen volumes as of August 2018.