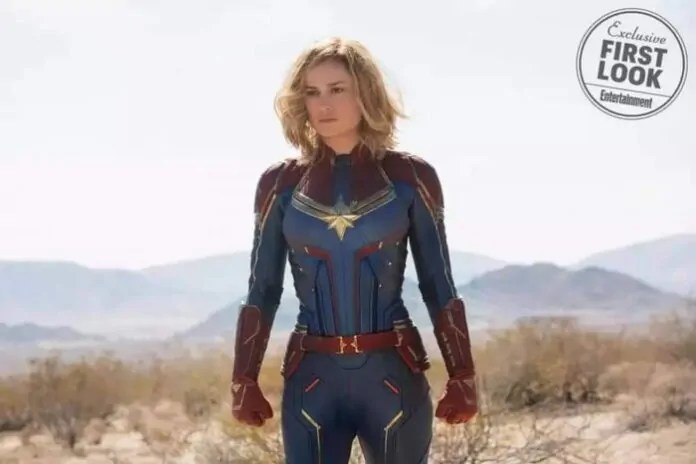 Hello, everyone. The wait has finally come to an end. Captain Marvel’s first look is out. Brie Larson is looking amazing as ever! Fans cannot stop discussing and going into full fan mode with it. Many theories are also out. On late Wednesday night, Entertainment Weekly released the first look of the most awaited (Well, who am I kidding? Second most awaited after *Avengers 4*.) films in the Marvel Cinematic Universe (MCU) with Brie Larson aka Carol Danvers dressed in her official costume. She has been introduced as ‘the galaxy’s newest and most powerful star’. “Her powers can move planets”. Subscribe to our Reddit Community for latest updates.

The official twitter handle of entertainment weekly, had this post captioned as
“The future is female! Here’s your exclusive first look at @BrieLarson as @CaptainMarvel, the galaxy’s newest — and most powerful — star: http://share.ew.com/sCQYPSe”

Looks like things are going to get just more exciting in phase 4 of MCU.

Captain Marvel was introduced to the fans by Nick Fury in the post-credit scene, Well, if this did spoil Infinity War for you, why are you even reading this? It was one of the best post-credits ever! Well except for the fact that Thanos turned half the world into dust with just a snap of his finger.

Doesn’t seem to be too way back into the past… does it?

Is that? he was dead, right? then … Okay, we definitely are talking of the past here… What’s your theory?

FIRST LOOK: Nick Fury in Captain Marvel. Looks like somebody got younger. Could it be the story of how Fury and Captain Marvel met?

SHE HAS FINALLY ARRIVED!!!