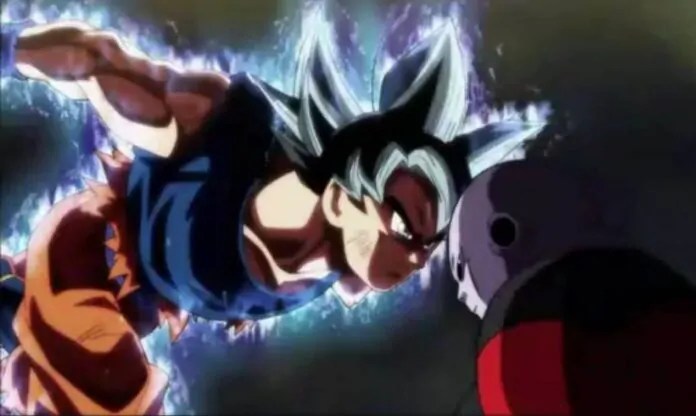 Howdy, everyone, the episode 109-110 had finally aired and it has broken all records already. Official sites had crashed, you would have been a victim if you watched the episode from Crunchyroll, But we recommend you all use official sites like it always!

The Japanese voice of Goku Masako is a female voice actor, but when Goku Ultra Instinct screamed while in his new form, we heard 2 voices mixed, that means there was some other voice actor or special effect too, Toei animation would have done this to give his new form a strong voice!

Let’s come back to this post, if you have watched the episodes then you probably have noticed something awkward, there are two different voices of Goku mixed. What does it suggest? Is there any connection of this with Goku’s new form. We here at Omnitos have a theory about it. But Why did they made his voice too strong?

During the fight with Jiren, Goku’s spirit bomb was repelled by Jiren with ease and Goku was pushed back and he was forced to break his limits to counter that Spirit Bomb which resulted in Goku coming up with a new power Ultra Instinct. Goku is in the gravity of his birth planet in the world of Void. This may have triggered original Saiyan power.

Also, Gohan and Vegeta noticed a change in Goku’s moves and the fighting style is looking unfamiliar like Goku is trying to beat Jiren terribly.

Currently, there is no perfect explanation behind these screams. We can only wait for upcoming episodes to know the truth behind it.