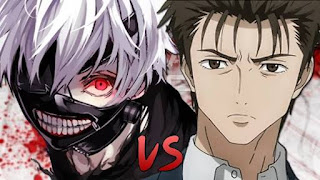 I really like Shinichi better than Kaneki but I think that Kaneki is gonna win. But, can I say that Shinichi will win? Well, there is a small possibility. First, Shinichi and Migi are better in teamwork and they are smarter. Ghoul skin may be impenetrable by human blade standards, but Migi’s alien blades are a different story. Kaneki surpasses Migi and Shinichi in speed as he has been able to dodge lightning (dunno what this kind of lightning is though, they never specified it) but I think Shinichi is able to keep up.

Other than this, I think durability and strength are even! Kaneki has better H2H fighting skills but Shinichi has a better-ranged game and a wider variety of attacks. Now, fighting Kaneki directly is just overkill for Shinichi, Kaneki is just on another level in close range fighting and his CentipedeMode is literally impenetrable, even by Migi’s blades not to mention that his physical boost is just on another level from Shinichi’s.

So Shinichi will have to fight smart and keep his distance, no problem. Both Shinichi and Migi have been shown to fight with just their wits before when they are horribly outmatched by someone, namely Goto.

Since Migi also contains super computer knowledge, he will know what a ghoul’s weak spot is. Another direct way of killing Kaneki is by having Migi enter his body and decimate all of the ghoul cells within.

This shouldn’t be a tough job since Migi has destroyed someone super-powerful like Goto before. Migi can also heal Shinichi mid-battle but this sacrifices Migi’s power so not a very good choice unless they are in a desperate situation.

Centipede Mode makes Kaneki go into an uncontrollable rage so Shinichi and Migi can capitalize on that fact. Shinichi’s super arm rock throw option will be useless, seeing as how Kaneki managed to dodge lightning.

Now onto their weaknesses. Kaneki doesn’t have any direct weaknesses to capitalize on so what Shinichi and Migi have to do is just outright defeat him, making the task harder. Meanwhile, Shinichi’s weakness is totally fatal to him but I don’t think this fight is gonna drag out for four hours straight. No doubt that in this time span, Migi would have already figured out what to do in the battle.

So my bets are on neither although I clearly stated that Kaneki should win, though I am still rooting for Shinichi 100%