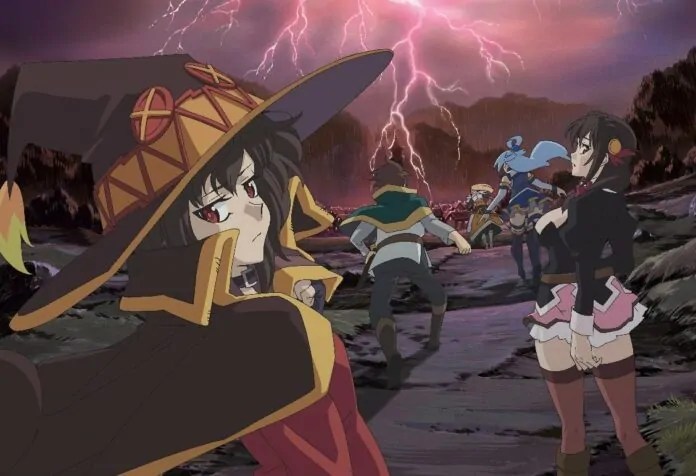 The KonoSuba: God’s Blessing on this Wonderful World! Or in short Konosuba’s upcoming Anime film name has been unveiled in a event in Japan. The movie is named as “KonoSuba: Kurenei Densetsu” or “KonoSuba: A crimson Tale”. A Promotional key Visual also have been released during the event. Subscribe to our Reddit Community for latest updates.

Talking about the key Visual it showcases Kazuma and crew along with Yunyun is having towards some dark and creepy mountainous place. The Key Visual also indicates a new art style which might not be convincing for some of the fans.

The movie is said to be rrelease in Japanese theatres in 2019 and will be handled by the same staff of studio J.C.Staff.

The movie name A crimson Tale indicates that the movie will adapt the Volume 5 which instead of being a compilation movie.

The volume 5 follows the afterwards story when Yunyun burst into the Kazuma and his crew’s less-than-relaxing vacation with shocking news-that the Crimson Magic Clan is in danger, and she wants to bear his children to save it! Kazuma returns with her to the village, but the situation isn’t quite what he expected.

If you are unfamiliar with KonoSuba then KonoSuba: God’s Blessing on this Wonderful World! is a Japanese light novel series written by Natsume Akatsuki which follows the story of Kazuma who died a laughable and pathetic death on his way back from buying a game, high school student and recluse Kazuma Satou finds himself sitting before a beautiful but obnoxious goddess named Aqua. She provides the NEET with two options: continue on to heaven or reincarnate in every gamer’s dream—a real fantasy world! Choosing to start a new life, Kazuma is quickly tasked with defeating a Demon King who is terrorizing villages. But before he goes, he can choose one item of any kind to aid him in his quest, and the future hero selects Aqua. But Kazuma has made a grave mistake—Aqua is completely useless!

Unfortunately, their troubles don’t end here; it turns out that living in such a world is far different from how it plays out in a game. Instead of going on a thrilling adventure, the duo must first work to pay for their living expenses. Indeed, their misfortunes have only just begun!

The Light Novel has been adapted into two animated series with the same name consisting of 10 Episodes each. An anime movie is underwork which is named as “KonoSuba: A crimson tale” and will release in 2019.