Today Majin Buu showed his true power at First he was just playing with the Universe 9 Basil but after Basil was given a drug by the universe 9 Kai,

It would have been great to see if he converted Basil into a candy bar or he himself turned into kid buu, I think he can’t do that anyway.

Basil started overpowering which resulted in injury to Mr.Satan therefore Majin Buu got angered and raged thereby defeating the Universe 11 warrior Basil by just a Ki blast at the last.

One of the mysterious warrior of Universe 11 stopped and just absorbed the Ki blast his name is Toppo , here is the image of him below : 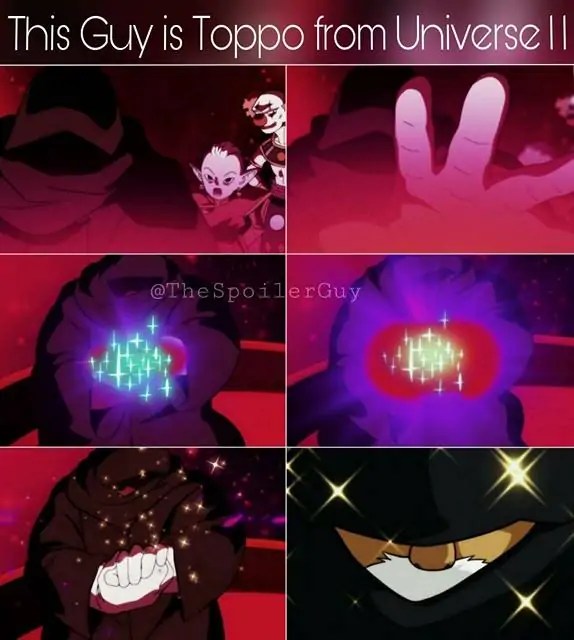 The showdown between Majin Buu and Universe 9’s Basil in the first round of the Omni-Present Match Has begun. Basil’s kick techniques connect one after the other, and Universe 9’s kaioshin is sure of his victory, but Buu hasn’t taken any damage.

The Omni-Present Match Finally Starts!! The Contestants for Universe are Goku, Gohan, and Buu! The losing Universe Will be wiped out??!

Their opponents are the fighters of Universe 9, “Trio the Dangers” : Basil,Lavenda and Bergamo.

The two Omni Kings(present and future watch over the outcome of the battle from the spectator’s seats. Omni- King leans out of his seat as he watched Buu laugh despite being at a disadvantage

Here, is the Video of Majin Buu vs Basil: