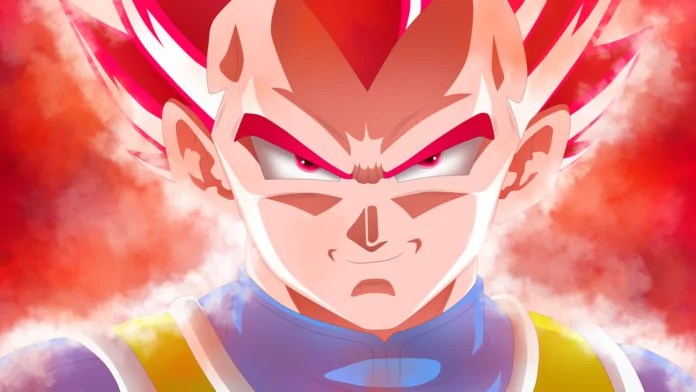 Official Vegeta New Form transformation in the Manga! So this might be possible in the anime too. He gained Super Saiyan GOD (red hair) for the first time ever in the Manga. Now, this has been Confirmed in the Dragon ball Super Manga Chapter 22 by Toyotaro. Goku Black recognizes the transformation too, Goku turns Super saiyan god to fight Zamasu while Vegeta turns Super Saiyan God to fight Goku Black. Gowasu is still hanging up alive but is the brink of bleeding out.

This is only in the manga so well maybe we won’t see it in the anime (not really soon). Now for all the fans, this article talks about manga so Tournament of power is not what we can relate to here. But whatever may the situation be Vegeta was and again in the Manga is beating the heck out of Black Goku and this leaves everyone shocked.

Zamasu gets angry on Black and scolds him for his weakness and follows the fusion by Potara earrings. We know merged zamasu is incredible, strong and he might meet the same end as he did in the Anime, (yes the forget to bring the mafuba sticker too).

This leaves us with the question and very specifically a desire, Will Vegeta get a transformation which beats Goku’s power levels?

Deep inside we have always wanted the Saiyan Prince to be a step stronger than Goku before Goku. This time the Super Saiyan God Red which presides Blue in the Manga can be taken as a hope for our desire to come true.

We are expecting a new transformation from him, as since the beginning of the survival tournament, DBS has been given really a lot of limelight and a Japanese magazine close to Toei Animation has revealed an interesting detail related to the Tournament of power where Vegeta was mentioned with specifics. Now we will be covering Vegeta’s expected Super Saiyan White form in the anime, in the coming articles, but for now, we need to ask ourselves will SSJ Blue enough to win the tournament of power?