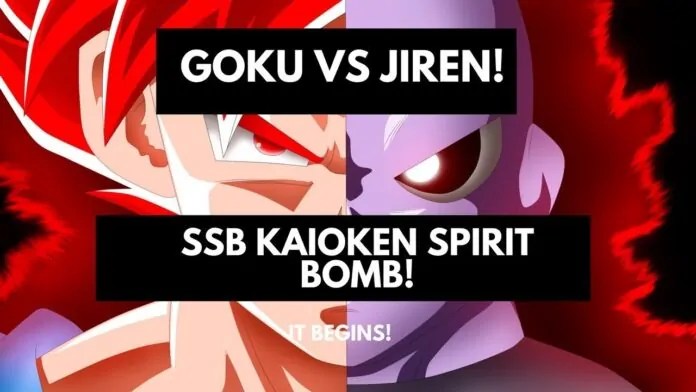 After the release of the new preview of episode 109-110, a new thing came up to my mind. Will Goku use two spirit bombs? The answer is no. First, he is going to throw the bomb in his base form and Jiren will try to repel it and then Goku will use his Kioken x20 to enforce it! (Speculation- Jiren may throw it back on Goku which may result in absorption by Goku to achieve his new form).

I know this will be awesome and I have an explanation for this too. You can see the pictures below for the proof. (Goku will also use Kioken x20 to fight Jiren before that)

In the new preview, you can see after throwing the bomb Goku actually gets into Kioken x20 to enforce it on Jiren before that he was in his base form!

First, he is going to throw the bomb and Jiren will try to repel it and then Goku will use his Kioken x20 to enforce it!

Although many are thinking that there is nothing new as he has done same against Buu but if we look closely we can clearly see that in the first pic he had been shown throwing that spirit bomb in his base form.

The only explanation to this is that the fan – theory of Goku absorbing spirit bomb to get new form is going to be legit maybe.

Till now we can’t say anything about what is actually going on inside Goku’s mind.