This is about Will There Be Demon King Daimao Season 2? Demon King Daimao season 1 was released in the year 2010. The show is based on the novel by Shotaro Mizuki. The novel was later serialized into a manga adaptation. The novel was completed in the year 2014 but the show didn’t get the season 2. The anime was not quite popular among other shows due to its simple and predictable plot.

The animation was done in a very beautiful way by Artland studios. The first season ran from April 2010 to June 2010, consisting of 12 episodes. The duration of each episode was about 25 minutes. There were six additional episodes following the end of season 1. The cast of the show is also quite impressive. But fans are having this question that will there be Demon King Daimao season 2?

The show got nothing to dislike, but at the same time, it does not leave much impact on the audience at all. It is a very typical high school anime with some unfortunate comedy and some quick sequence of events. The show doesn’t run at the same pace throughout the season. It does not leave the audience with any suspense, with every passing episode you already know what’s coming next.  This is one of the major drawbacks due to which it has not left an impact on the audience.

But there are also moments that some viewers might enjoy watching. Only because of lack of plot execution the show can’t be termed as an epic one. The major two battles from season one were so quick that both the battles were cramped into one final episode. If only every section of the plot was executed patiently, the anime could have left a better impact on viewers.

The story is about an orphan boy named Akuto Sai. He enters the Constant Magic Academy, where he meets Junko Hattori. They both have got the same vision of making the world a better place. Junko is a member of the Iga Ninja clan and also she is a disciple of God Suhara. They both vowed to make the world a better place on their way to the academy. In the academy, Akuto is told in a prophecy that his future occupation will be a “Demon Lord”. 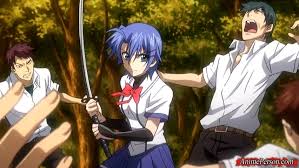 Everyone in the academy is scared of him after knowing about Akuto’s prophecy. He continuously denies this but no one is ready to believe him. He is also quite popular among girls. Somehow when he accidentally masters the dragon, peterhausen, he begins to unfold some new secrets about the world, God, and himself.

Season 1 of the show ended in the year 2010. There has not been any news regarding the making of season 2 from the officials. After the abrupt end of season 2 viewers are waiting for season 2 to release. Sadly there has been no announcement regarding season 2 in the past 11 years.

What Can We Expect From Season 2 of Demon King Daimao

If the studio decides to make another season for the show, then there are various numbers of plot ideas. The novel has got 14 acts, most of which are not animated yet. Many different plots could be taken from these novels. Plus in the first season, many plot holes are needed to be covered up. There can be more of Kena holding on to Peterhausen’s teeth in the end. This could be a proper twist that this show needs.

The possibility is there for Akuto that he might have killed God. Now as we know nor Akuto nor peterhausen became God, it is a question that who might be the next God? Many characters in the first season were introduced late so we might get to know more about them in the new season.

The anime is good for a light watch and very simple to understand, so if you are looking for light action and with good comedy with a little bit of magical touch you can try this how. You can watch it on Crunchyroll and Amazon Prime.