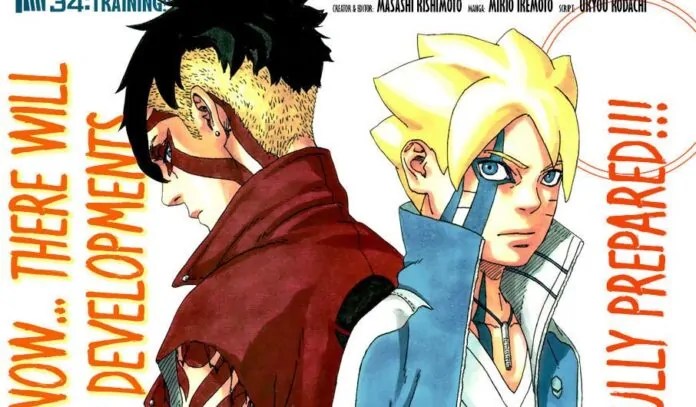 Howdy, everyone. Boruto: Naruto Next Generation Chapter 34 English was revealed yesterday on unofficial sites. Boruto Chapter 34 English version will be officially released on Viz on April 22. The chapter was really one of the best ones so far, which revealed many-many new things for the franchise.

The two key major things that were revealed were that the Delta is alive with 2 more bodies of her left (the ‘Second’ one is now in working condition and there were 3 in total, first one got destroyed after a fight with Naruto and the third one is resting in the vessel).

And the other Major thing they talk about is that Jigen is powerful than Naruto, and Jigen’s weakness is ‘Karmas’ be it Kawaki’s karma or be it Boruto’s Karma.

Jigen can only be defeated with the help of Karma as per chapter 34. Kashin Koji talks about the power of Naruto being Absurd (High) but still no match for Jigen.

Delta (new 2nd body) reveals to fellow enemies (Jigen and other at their place) that Boruto has karma, which they all didn’t initially know, that someone besides Kawaki has ‘Karma seal’.

Kāma is a seal that takes the shape of a black diamond on the user’s body. Although unfamiliar to the population at large, Organisation ‘Kara’ has gathered intel on it and similar seals.

Kashin Koji looks like someone who is already an old citizen of Hidden Leaf as he wasn’t detected as he didn’t have a stranger’s chakra, and he also can perform Rasengan. Maybe who knows if he is related to Jiraiya Sensei.

Boruto Chapter 35 will release on June 10th as per the last page of chapter 34. Chapter 35- Kurama shows up suddenly and talks to Kawaki, what will happen while Naruto is sleeping?