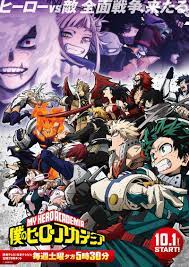 A brand new update from the series confirmed when exactly season six is going live. The Boku no Hero Academia Season 6 release date is currently set for 1st October 2022. The new season will air on Japanese televisions on the Yomiuri and Nihon Television channels, every Saturday at 5:30 PM Japan Time (1:30 AM PST / 10:30 AM CEST). New episodes will then go live weekly, and fans can expect Boku no Hero Academia to continue its simulcast schedule in international markets.

That being said, they can also get a sneak peek of the first episode at this year’s Hero Festival. The live event will be held on 24th July 2022 and will present guest appearances from the voice actors themselves, according to the Japanese website for the Hero Festival.

Obviously, this anime is not the only one about to release soon. In fact, My Hero Academia is one of several hits scheduled to return to television in October. Mob Psycho 100 Season 3 is set to come out this fall along with the second part of Spy x Family Season 1. To Your Eternity Season, 2 is also expected to go live alongside Golden Kamuy Season 4. Coming to brand-new titles, Bleach: Thousand-Year Blood War has confirmed its release alongside Blue Lock and Urusei Yatsura.

A quick recap of the story till now

A vicious war is fast approaching the state of Japan. Shigaraki and the Paranormal Liberation Front are going to act very soon. Pro Heroes will quickly have to do something if they want to stop them.

Deku and Shigaraki are ready for a major confrontation. Between Boku no Hero Academia Season 6 and the summer OVA, 2022 will be an exciting year for all the fans. We are all excited to see what Kohei Horikoshi has to surprise us with.

Fans are excited for My Hero Academia Season 6

What to expect from Season 6?

My Hero Academia Season 6 will surely be a historical turning point in the series. The heroes will fight off against the villains in a full-scale war. Many characters will finally get their chance to showcase their strengths in the upcoming battles.

Deku and Shigaraki have only grown to become very strong in the recent arcs. Boku no Hero Academia Season 6 will likely lead up to their fated encounter. Fans have been waiting for it for several years now. Lots of things are at stake as neither side can afford to lose this upcoming war and, we can expect some major injuries along the way.

The previous season ended with the villains enhancing their forces. Having said that, the heroes would not be caught unaware since Hawks is a double agent in the Paranormal Liberation Front. Without giving spoilers, one can say this next season is bound to have several twists and turns. Other than that, we believe that the series will undergo some massive changes.

While waiting for the next season, fans can look forward to the upcoming OVA, entitled “HLB”. The official Twitter page released the poster a little while ago. The poster will feature Pro Heroes and U.A. students competing in a baseball game. The poster seems to indicate the following team divisions:

We all can easily notice that the main characters, including Izuku Midoriya and Katsuki Bakugo, are missing in there. Nevertheless, fans can totally expect their presence in the OVA which will most probably release in June this year.

More About My Hero Academia

Humans are slowly originating “quirks” or superhuman abilities that allow them to shapeshift and manipulate elements. While 80 percent of the humans have some unique quirk, the rest do not have any powers, like Izuku Midoriya.

Izuku always dreamt of being one of the greatest heroes of all time. He also idolized one of the strongest heroes of all time, All Might. Despite his lack of quirks, Midoriya is persistent and has the heart of a hero as he always saved people. One day, Izuku ended up bumping into All Might. While most people are born with quirks, All Might’s abilities are transferred, and upon meeting the young boy, the hero chose him as his successor.

While the young boy had to face months of exhausting training to use the quirk, he finally learned to utilize his abilities and joined one of the most prestigious hero schools, UA.

The story of Boku no Hero Academia follows Midoriya’s journey as a hero, and his efforts will ultimately influence the world’s fate. Thanks for reading!

Chainsaw Man Manga Overtakes One Piece on Manga Plus

Videography Is The New Wedding Trend And Why You Should Go...

What Is High Ticket Digital Marketing And How Does It Work?

What Really Happens When You Win The Jackpot At A Casino?