Dr. Stone is a popular new-age anime and manga written by Riichiro Inagaki and illustrated by South Korean artist Boichi (read about the artist on Wikipedia). Right now, Dr. Stone is about to release Season 3 of the series and the fans are extremely excited. When the second season of the anime the creators had announced there were already plans in place to not only continue with the third season but return much sooner with a new special all about Season 3’s big addition, Ryusui Nanami. With this new special coming this Summer, fans are now eager for the full third season of the series. So right now we are about to discuss the release date of Dr. Stone Season 3 and the recent updates on it.

Dr. Stone previously revealed that the third season of the anime would come out sometime in 2023. After releasing the final official chapter of its manga earlier this year, Dr. Stone has now confirmed the release of Season 3 for April 2023.

As per the reports, the third season of the series will also carry the subtitle “New World,” and in that case, it makes quite a bit of sense as after establishing a much bigger base of operations for the Kingdom of Science (after incorporating Tsukasa’s group into it), Senku Ishigami and the others head out towards the open seas in search of the new way to advance each of their lives and save everyone else presently trapped in stone. Fortunately, we wouldn’t have to wait too long before we see the next crucial step as Dr. Stone: Ryusui will be hitting this Summer. 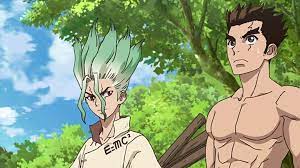 After five years of having unspoken feelings, high school student Taiju Ooki is finally ready to confess his love for Yuzuriha Ogawa. However, when Taiju begins to confess his sins, a blinding blue light strikes the Earth turning everyone into stones. Thousands of years later, Taiju wakes up and finds the modern world to be completely empty, as nature has flourished over the years of humanity. In a world where everyone has turned into stones, Taiju meets another living person: his scientific friend Senkuu, who has been working for several months. Taiju learns that Senkuu has developed an excellent strategy — to launch a completely new civilization with science. Taiju and Senkuu come together to form a wonderful relationship, and they soon find a way to revive those who have turned into stones.

Also, read Top 10 Anime Like Dr. Stone to watch and get into Science!

What can we expect from season 3?

We can expect Dr. Stone to adapt the Age of Exploration arc of the series. Senku and his comrades will most likely go on an adventure by the sea in an attempt to unveil the secrets behind the blinding light that turned humans into stones. It will be interesting to see what kind of inventions the team comes up with this upcoming 3rd season.

Where can you watch Season 3 of Dr. Stone?

You can watch the new anime special along with the first two seasons of the anime, on Crunchyroll. The entire manga run has been completed (along with a new epilogue chapter released recently), and you can read it on Viz Media’s digital Shonen Jump library with a paid subscription. Thanks for reading!