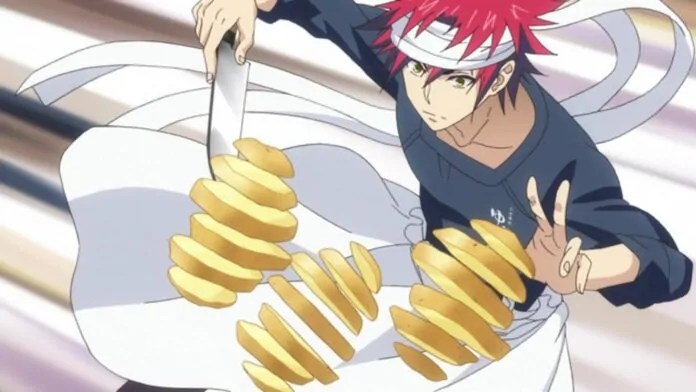 Shokugeki no Soma or Food Wars recently announced its April Release Date. The news came from A.I.R, a trusted anime influencer among the fandom. The Food Wars Season 5 will release on April 10. Season 5 will adapt the “BLUE” story arc.

The 5th season of the “Shokugeki no Soma" (Food Wars) TV anime will have its broadcast premiere April 10th with the BLUE arc https://t.co/48P0ORlYIq pic.twitter.com/KJUW27igus

A new key visual has also been released which previews Season 5 main antagonist Blue. Have a look:

Episode Count hasn’t been officially announced yet but is expected to be of 12 Episodes.

Streaming: Where to watch?

Food Wars Season 5 will be available on Crunchyroll to watch and you can catch-up to the previous 4 seasons through Crunchyroll too.

written by Yuto Tsukuda and illustrated by Shun Saeki, Food Wars!: Shokugeki no Soma is a Japanese manga published in Shueisha’s Weekly Shonen Jump from November 2012 to June 2019. The manga has been compiled into 36 volumes which are available on Viz Media digitally.

The show revolves around teenager Soma Yukihira aspires to become a full-time chef in his father Joichiro’s family restaurant and surpass his father’s culinary skills, but Joichiro gets a new job that requires him to travel around the world and closes his shop. Joichiro has Soma enroll in Totsuki Saryo Culinary Institute, an elite culinary school where students engage in food competitions called Shokugeki.

He secures himself a spot at the school, despite the objections of Erina Nakiri, the talented granddaughter of the school’s dean. Soma is assigned to Polaris Dormitory where he meets other aspiring chefs, including Megumi Tadokoro. The story follows his adventures as he interacts with his peers and challenges Totsuki’s students as well as others in Shokugeki competitions. Learning that his father was not only a student of Totsuki, but also the second seat in the Council of Ten; Soma plans on becoming the best at the academy. Also, read about One Piece’s latest chapter.

The God Of High School Episode 12 Release Date, Spoilers, where to watch