We are back with some more exciting predictions about what’s going to happen, but before that, we will have to talk about what happened in Vincenzo episode 13 and 14, which recently was released on 3rd and 4th April 2021, respectively. Of course, Vincenzo has been keeping up with its ratings as always. Vincenzo episode 15 is pointing towards some big drama, let’s get started.

The released date for Vincenzo episode 15

Where can I watch Vincenzo episode 15?

You can watch Vincenzo episode 15 on Netflix and if you are patient or want to binge-watch it will be available on Viki as well.

We already put out our predictions about Vincenzo Episode 13, but we will have to give you the highlights of episode 13, especially the ending. The ending of episode 12 had us shook, by Mr. Choi’s betrayal, seems like it was indeed a betrayal from the beginning. Mr. Choi was here to steal the Guillotine file as he works as a secret agent and is working with Prosecutor Jung. They were also a minute close to getting exposed by the tenants about the basement, and Vincenzo left the iris info device in the basement in hurry and also locked the file back into it. Vincenzo and the team decide to target the vision team of Babel to plan a raid on them to distract them and meanwhile they will attack the illegal paper factory-Babel that buys stocks in the name of an art gallery and they manage all the finances of the paper factory. 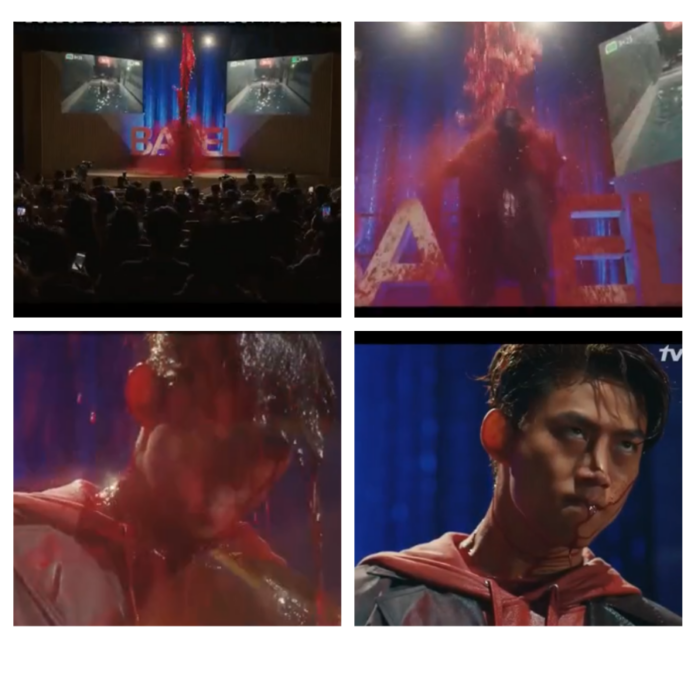 Vincenzo plans out a disrespectful show for Jan Han Seok, in his first-ever influential lecture where he showed solid evidence for investigation and also splashes pig blood on him in front of all the audience and media, as they used to do in Italy in the 1960s to show they are superior.

Han Seok drenched in pig’s blood annoyed at Vincenzo is taken for investigation. Of course, they get out of it the same night and Vincenzo gets onto his new plan for reaching the art gallery and finding out about the finance file.

Ms. Seo told them that she is the one who builds the safe system and iris recognition system, and of course, she can also open it without the demolition of the plaza. She used to work as a hacker before that and she joins the team. 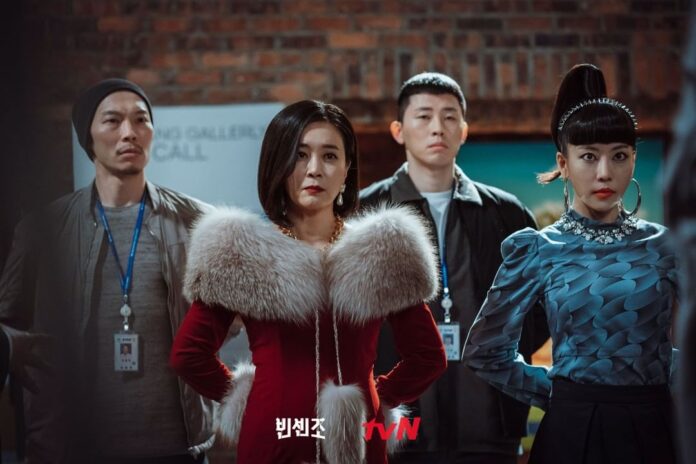 They rent out the art gallery for personal use by hacking the list and took the original couple to GEUMGA plaza and Vincenzo and Cha Young went there as a couple. Vincenzo helps her in picking an outfit and also gifted her a stunning Jewellery set.

They reach the venue and they start acting like a couple so in love and give all the shippers a reason to watch this episode over and over. No doubt they look absolutely adorable together. Little did they knew, the actual couple rented the place for a surprise proposal, they had to play along to make the owner believe that they are a couple.

Vincenzo got down on one knee and asked Cha Young to marry him, she was enjoying this way too much, a diamond ring, a mafia on knees and so much attention. She said yes! The owner said they have to kiss to complete the proposal, Vincenzo was awkward but Cha Young just went for it, and Vincenzo got indulged too. Episode 15 will be the latest episode.

Out of the dreamland, this was all acting, or was it? They got successful in hacking the main office computer and also get out of there as fake agents. Vincenzo and Cha Young joked and cringed upon their actions and decided to drink on the rooftop for celebration.

Vincenzo sensed something was wrong and send off Cha Young for some errands and went by himself on the rooftop and Paolo (his stepbrother) was all ready to kill him and the episode ends.

The preview of Vincenzo episode 15 is so confusing, but here is what we think. Han Seok will face the downfall of his company but does not know if it’s due to Vincenzo or his own brother. We see Cha Young in a traditional outfit that means there are more planning and plotting. Paolo will fail in captivating Vincenzo. Han Seok will find out about Vincenzo’s sick mother. Will he use her for getting Vincenzo back? Cha Young and Vincenzo start dating?

Thanks for reading What will happen in Vincenzo Episode 15? Predictions, Release Date.