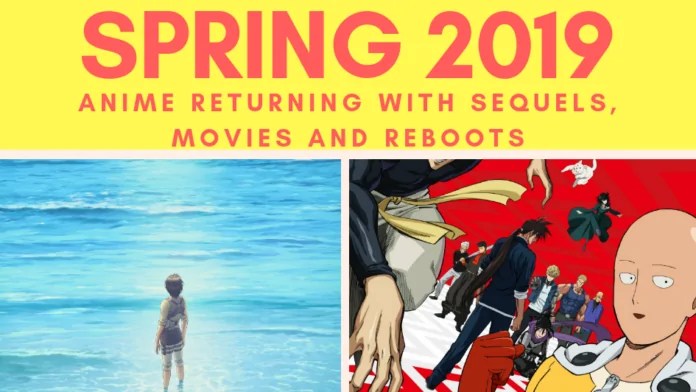 With new anime titles like Kimetsu no Yaiba, Fairy Gone, We Never Learn to debut this Spring, there are a handful of fan favorites that will be returning for a sequel either in the form of a TV anime series, movie or reboot. Let’s have a look at them. There is much more new upcoming anime but here are some of them.

After the 6 months-long hiatus, Attack on Titan Season 3 will return with the start of “Return to Shiganshina”. Unlike the first cour, the second part will be the polar opposite of it with great Titan combats.

Synopsis Attack On Titan Season 3 Part 2
There is peace again within the Walls, and the Survey Corps prepare for a new expedition to Shiganshina. Thanks to Hange’s new weapon, the hopes to retake the lost territory once and for all are stronger than ever. But at their old home, known and powerful enemies are awaiting and a fierce battle is coming.

Unlike the first season produced by Madhouse, the second season will be handled by J.C. Staff under the direction of Chikara Sakurai

The anime will kick off with the King arc when a mysterious organization sends an assassin after the class S-hero King who is also known as the world’s strongest man. Soon the shocking truth about King is revealed!

Instead, a sequel, Fruits Basket(2019) will be a reboot adapting the original manga material in the form of two Cour seasons. The first one will premiere on April, 5th and the next one in October 2019.

High school student Tohru Honda begins living alone in a tent after she loses her mother, who was her only remaining family member.

Still, there’s something Tohru doesn’t know yet: the Sohma family has been bound for centuries by a horrible curse…

is an upcoming movie sequel of Seishun Buta Yarou (Rascal Does Not Dream of Bunny girl Senpai) TV anime series which premiered back in Fall 2018. The movie will adapt sixth and seventh Volumes of Light Novel series

The movie will be focused on Makinohara Shouko, where Mai visits Sakuta and found out that Makinohara Shouko been with him for the last 5 days. A small fight ensues between them. Sakuta visits Rio seeking help.

The Bungou stray dogs will be one of the many big series making a return this Spring. The season will again be handled by Studio Bones and Takuya Igarashi, who previously has worked on the last two seasons and movie Dead Apple will be returning for the third season.

Unfortunately, no synopsis is available for season 3 as per Bungou Stray Dogs. The story centers on individuals who are gifted with supernatural powers and use them for different purposes including holding a business, solving mysteries, and carrying out missions assigned by the mafia.

The story mainly follows the members of the “Armed Detective Agency” and their everyday lives.

Well, these are some of the big anime titles returning this Spring 2019. Personally, I can’t wait for Attack on Titan and Fruits Basket while concerned about the One Punch man production. So which anime you are looking most forward to.