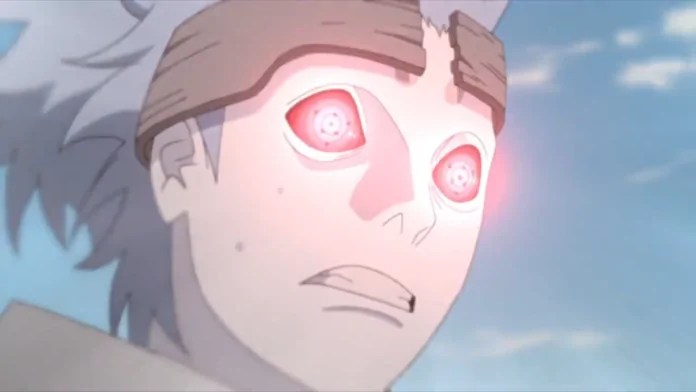 For the people who have seen today’s Boruto Episode 120, you all might be thinking that Sasuke has been Nerfed, or shown weak. But, beware that this is not the case.

Sasuke is really powerful, it’s just that he was caught off guard due to intervention from Boruto and Secondly, Otsutsuki villains are getting more and more powerful.

We think Urashiki doesn’t know that Sasuke has Rinnegan that can teleport him back.

The Episode just showed us Urashiki with 2 Byakugans which are both convertible to Rinnegans with Tomoe just like Sasuke’s. Urashiki Rinnegan is red because he is a ‘Pure Otsutsuki’ and in general people who possess Byakugan to have red Rinnegaans.

But Urashiki even has Tomoe’s in those eyes, therefore he can use additional abilities like Spacetime Teleportation.

It can be clearly noticed that Urashiki used his left eye to transport Sasuke to another Dimension! The ability of Urashiki’s right Rinnegan eye is still unknown. And his Fishing Hook steals Chakra and abilities temporarily.

Sasuke will be back soon, probably as soon as his chakra regenerates to activate Tomoe in Rinnegan and teleport back to the Sand Village.

Urashiki wants to gather Chakra of Tailed Beast Shukaku for some reason.