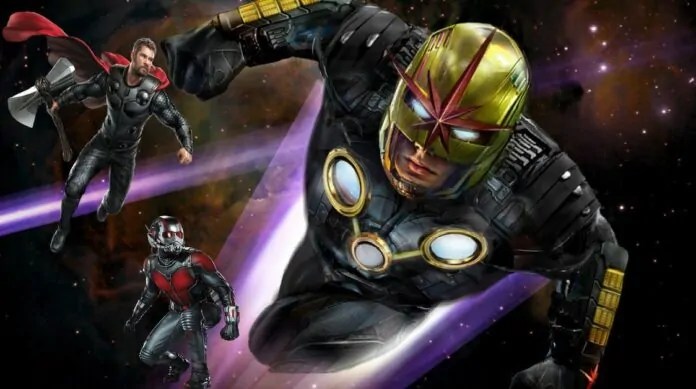 Since Spider-man far from home is wrapping up phase 3, everybody is starting to wonder what phase 4 looks like? Reported by Cosmic Wonder YT.

We already know what was coming to phase 4 of the Marvel Cinematic Universe.

Now there’s been a supposed leak of the ‘phase 4’ slate showing the movies that we already knew were coming but some ‘New Movies’ as well but all lined up perfectly with how Marvel wants to take the MCU in the future!

With a good majority of the information on this leak coming from or being confirmed by the account on Twitter called ‘Roger Wardell’, no one knows if that is actually his true name but back in December of 2018 before Avengers Endgame came out, this person posted many Avengers Endgame leaks that ended up being 100% true.

Including his leaks about a lot of characters returns, Captain America saying hail Hydra and the very first thing this person posted back in December was fat Thor.

It is a very legitimate source who has also been talking about guardians of the galaxy 3 and Doctor Strange – so we’re gonna go ahead and break down this new Marvel phase 4 slate leak.

The first movies that this leaked states that are coming are Black Widow the Eternals Black Panther 2, Shang-chi, Doctor Strange 2, and guardians of the Galaxy vol. 3, like I said we pretty much knew these movies were already coming,

But here’s where it gets very interesting is the next movie that is said to be in development already is ‘NOVA’.

There have been many reports that Nova is in fact in development and we’ve even learned about a deleted scene between fan OHS and Nova in Avengers infinity war /or Endgame.

The writers revealed that they originally had plans to show Thanos going to Xandar and obtaining the ‘power stone’ which is where he would have fought Nova, so the fact that this states that a Nova movie is in development is right on track

With everything that we’ve heard so far, this league then goes on to talk about movies that are not yet in development but are planned for phase 4 and the future of the MCU.

So, even though everybody is talking about phase 4 there might not be any more phases Kevin Feige has talked about getting rid of them but there’s been no confirmation yet so until then we’re just going to assume like all these movies are going to be coming out in phase four and phase five.

This leak goes on to say that there are plans for Thor!

The next movie it states is Ant-man 3

This also makes sense as well, a lot of people have speculated that there would be another Ant-man and why wouldn’t there be the movies have been successful, they haven’t been huge like all the other movies but they have been very successful still and ant-man 3 will probably be pretty important moving forward and the MCU has given the fact that it’s all about the quantum realm and since the multiverse is being introduced into the MCU.

The quantum realm will most likely play a pretty important role in traveling between the universes.

Then we have Captain Marvel 2

They’ve already set Captain Marvel as the Marvel’s big character moving forward with the future of the MCU.

Here’s where this leak gets really-really interesting.

It says that movies that Marvel has plans for art the New Avengers The Young Avengers and the Dark Avengers.

Now, the New Avengers is a no brainer at some point in time, we’re going to have new Avengers and Avengers Endgame seems to set the groundwork for the Young Avengers

We saw Hawkeye training his daughter Lyla with a bow and arrow so she’s set to take over his mantle, we saw Harley Keiner at the genius boy from Iron Man 3, we saw Ant-man’s daughter Cassie Lang and not to mention at some point in time Morgan Stark will most likely want to take on her father’s mantle!

So, the groundwork for the Young Avengers has already been set in Avengers Endgame.

But the ‘Dark Avengers’ is something that a lot of people have begun to speculate about recently especially if Norman Osborn gets introduced into the MCU.

Which this leak does talk about later on a leak then goes on to state that, Falcon and Winter Soldier, Wandah & Vision, Loki, and Hawkeye are being developed for Disney Plus but the characters will still be featured in the movies.

Wanda and Vision have reality-altering powers as per producers! The leaks go on to say that the X-men and the Fantastic Four will not appear until ‘phase 5’ which has pretty much been confirmed by Kevin Feige as well he said that we most likely will not see the x-men or Fantastic Four entered the MCU for at least five years from now.

We already knew that the future of the MCU was going into the cosmos specifically with guardians of the galaxy and Captain Marvel and now with a ‘Nova’ movie in development but of course you’re still going to have events happen on earth, so it makes sense that there would be some sort of a divide between the two of them.

This makes sense because if Captain Marvel and Thor were fighting people galaxies away from Earth they probably wouldn’t interfere with earth too much and wouldn’t really overlap with any story’s going on on earth, so the fact that the cosmic MCU and the grounded MCU are going to be divided makes perfect sense!

We know Chris Hemsworth has more movies left doing guardians of the galaxy three and four and also Chris Pratt has several movies left as well.

So, there’s going to be plenty of cosmic MCU movies the leak goes on to state that the main antagonist for the grounded MCU is supposed to be Norman Osborn provided that Marvel and Sony renew their contract!

This is something that everybody is speculating about right now especially because in the Spider-man Far from home trailers and clips that we’ve seen, we see the older Avengers Tower get bought reconstructed and is now finished and everybody widely believes now that it is the Oscorp building!

Introducing Norman Osborn Oscorp and the Green Goblin makes perfect sense moving forward with the grounded MCU, so that’s it for this leak on Marvel’s Phase 4, 5.

For the Upcoming future movies of the MCU keep in mind that Kevin Feige said that they’re going to announce their plans moving forward with the MCU after Spider-man Far from Home.

Spider-man Far from Home comes out July 2nd and then San Diego Comic-con (SDCC) is on July 18th and Marvel is confirmed to be there this year, so this would be a perfect time to introduce the phase 4 lineup in the future movies of the MCU moving forward.

Of course, that’s just speculation but it would be the perfect and ideal time for Marvel to do that so we will officially find out the slate of future Marvel movies very soon again this leak has merit to it but it is a leak so take it with a grain of salt!

But let me know what you think about this lineup are you satisfied with it? Or would you like to see different movies come to Marvel and what are you looking forward to most about the future of the MCU let me know your thoughts in the comments below.