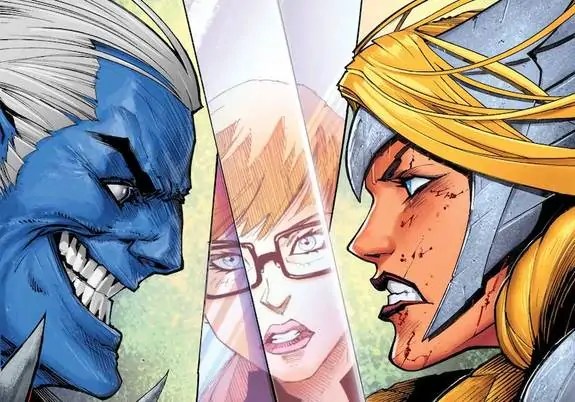 Marvel Comics announced at C2E2 in Chicago that authors Jason Aaron and Al Ewing will co-write a series centered on the character (Valkyrie), turning out of the events of War of the Realms. The series will be co-written by Thor author Jason Aaron, who will present Valkyrie a spotlight in his long-gestating War of the Realms event, including Immortal Hulk author Al Ewing.

Aaron also teased that Valkyrie will have a vital part to perform in War of the Realms, setting up the new continuing series. Valkyrie will take Writer Aaron’s long run writing Marvel’s Thor titles to a conclusion. Marvel did not expose the artist for the series. It also did not give specifics regarding the story of the series.

Al Ewing will cowrite, spinning out of War. pic.twitter.com/zW4MUluQr4

First emerging in 1970’s Avengers #83, Valkyrie, also known as Brunnhilde, was designed by Roy Thomas and John Buscema. She Possesses superhuman abilities matching for an Asgardian soldier, she’s the leader of the Valkyrior, Odin’s special shield-maidens. She ultimately goes on to become a founding part of the Secret Avengers. Most recently, she was appointed by Kid Loki and Angela to be a part of the Asgardians of the Galaxy.

Although the Valkyrie character was raised from the comics, she was massively modified for the Marvel Cinematic Universe. The comics have traditionally defined Valkyrie as a blonde-haired warrior clothed in tight-fitting armor. Rather, Ragnarok director Waititi revives Valkyrie to add a bit of variety to his film. Thompson’s outfit was visually stunning but was more leather than metal.

Are you passionate about the new Valkyrie series? Let us know in the comment section.