Howdy, everyone. Buu is getting a power-up and character uplift reported by DbsHype on Twitter. Watch full chapter 48 on VIZ.COM when it releases officially on May 20, 2019, these are just small leaks.

Here is the ‘Full Detailed Summary/Spoiler/Plot’ for Dragon Ball Super Manga Chapter 48 below. Thanks to Goreshx (for translations) and Spytrue (for Scans). Big Spoiler Warning!!

Goku and Vegeta are cheering on Buu as he is pounding away at Moro and Meerus are in awe at how well Buu is doing.

When Majin Buu uses his head as a weapon, Jaco exclaims that Buu uses a very unusual and nonsensical way of fighting. Vegeta says that at times like this, Buu’s unusual fighting style comes in real handy.

Goku mentions that even though it appears that Moro’s magical has no effect on Buu, Buu still appears much stronger than he was previously. 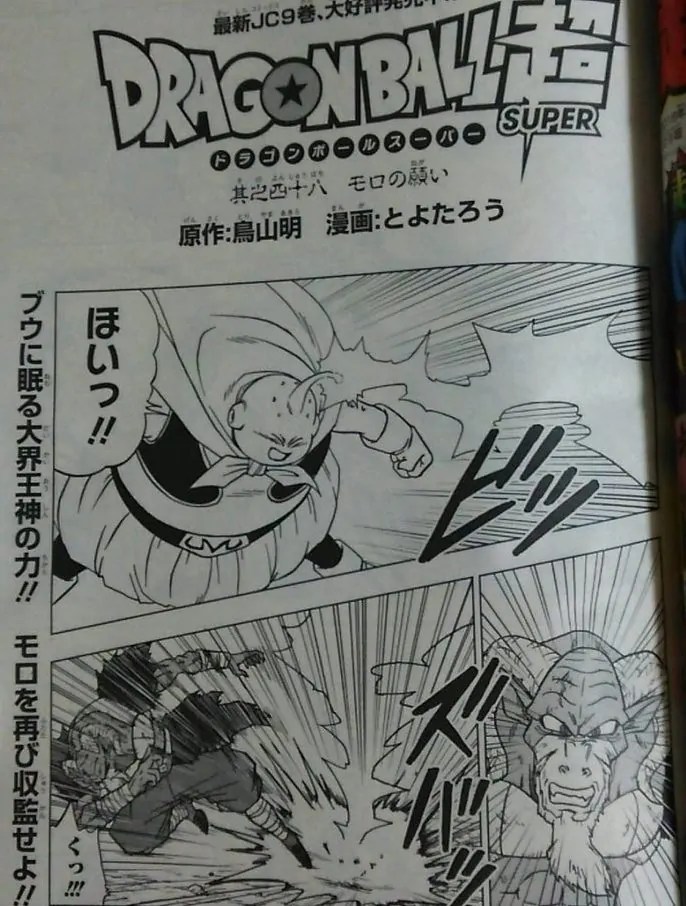 Meerus says that Buu might have been able to unlock his hidden potential through regaining his memory of the Grand Supreme Kai but this is beyond even his own expectations.

After a while of getting beat up, Moro gets extremely angry and yells out that it would be impossible for him to lose if he were able to reclaim the full extent of his magical powers as well as to devour planets.

Buu begins to mock Moro by saying that even though he’s a complete wimp in comparison to himself, he keeps making excuses as to why he is losing, which “isn’t cool.”

Goku, Vegeta, and Meerus continue watching this completely one-sided fight while Goku says that Buu can easily win if things keep going as they are.

Meerus agrees that Buu is completely overpowering Moro but Moro is able to use a vast array of magical abilities in order to turn the tide, so he instructs Buu on using “that technique” in order to ensure that Moro cannot counterattack.

Buu soon cuts off 4 copies of his own hands in order to pin Moro down to the ground and power up some sort of ability, to which Moro seems terrified of when all of a sudden the sky turns dark.

Everyone is wondering why all of a sudden it became night, but Goku and Vegeta realize that this is because someone has summoned Porunga.

It is soon revealed that Cranberry managed to summon Porunga and one panel shows him killing off a Namekian elder with his ray gun.

Cranberry says that as an upper-class warrior in the old Frieza Forces, he is more than capable of taking care of young and old Namekians. 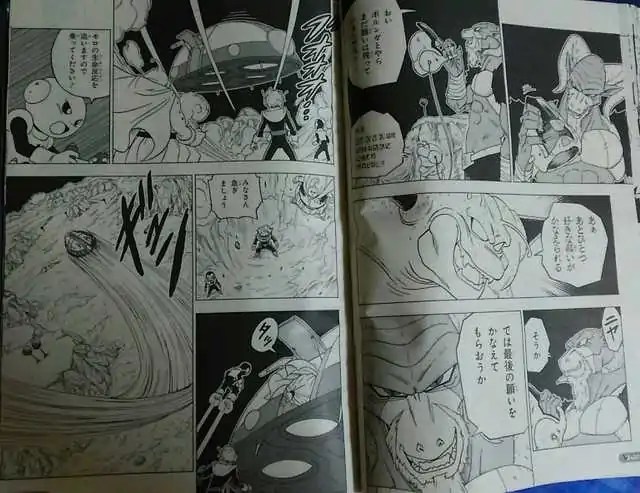 Cranberry’s first wish to Porunga is to heal his wounds since he is on the verge of death, which is immediately granted.

Goku notices that if Cranberry is able to grant all 3 of his wishes quickly things could get ugly, so Goku and Vegeta decide to fly over to where Porunga is themselves.

Moro soon telepathically contacts Cranberry and tells him to hurry and have Porunga fully restore his magical capabilities to which he does.

After Moro fully gets his magical powers restored, he is able to break free of Buu’s hold and rushes over to Porunga faster than Goku and Vegeta are able to.

Cranberry is about to make the third and final wish, which is to transport himself to a planet where the Frieza Force, Galactic Patrol, and even Moro would not be able to find him. But before he is able to complete the wish, Moro impales him from behind.

Moro says that Cranberry did well and that it looks like Cranberry won’t be needing to make any more wishes because there is 1 more wish that Moro wants to be granted. What it could be?

It is not directly shown what this new wish is.

Meanwhile, Meerus, Jaco, and the rest of the Galactic Patrol board their space ship and see Porunga nearby.

Goku and Vegeta finally catch up to Moro who has just finished making his last wish. Goku is extremely angry after noticing that Moro has killed everyone, to which Moro responds by saying that is was actually Cranberry that did that.

Vegeta asks Moro what he wished for. Moro says that it was to fully restore his magical powers, but Goku says there was 1 more wish that he made and that he better say it.

Moro responds by saying that they will soon understand and that he has no more reason to fight them and teleports off somewhere.

Buu and the Galactic Patrol show up and Buu says that Moro’s power did not simply increase due to him regaining his Magical Powers, but that Moro is probably also planning to devour this planet.

Buu goes over to heal Esca but says that the other 2 cannot be healed since they are seemingly dead.

Soon the ground starts to shake and everyone presumes that it is Moro who is attempted to drain the planet of its energy.

Buu walks over to Goku and Vegeta, touches their faces and completely restores their stamina.

When Goku and Vegeta look up to thank Buu, they notice that it is actually the Grand Supreme Kai.

The Grand Supreme Kai greets everybody and says that while they were fighting Moro, he and Buu decided to switch places with each other.

He also says that they still have time to defeat Moro before he is able to completely devour this planet.

Meerus says that he will try his best to help Goku and Vegeta and get up close with his Spaceship and that they should all be careful of Moro’s Magical Powers.

Lastly, Meerus says that he definitely knows that Goku, Vegeta, and the Grand Supreme Kai can do this. Vs. Moro!! The final decisive battle of New Namek!

Next chapter of Dragon Ball Super that is Chapter 49 will be in June nearby 19th of the month approx.