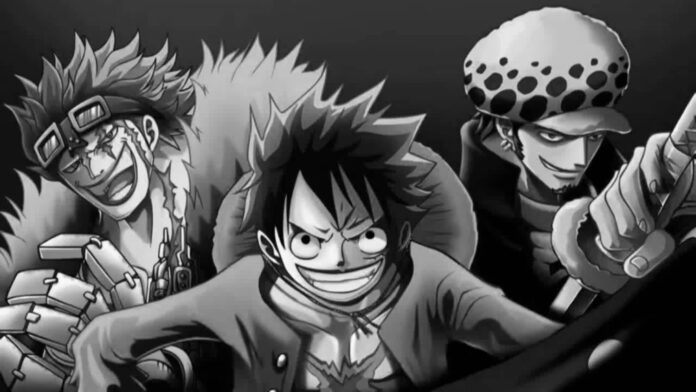 Luffy, Law and Kid alliance along with other 4200 Soldiers and Kozuki Oden’s scabbards are on their way to Onigashima (Kaido’s place), to reclaim back Wano and end the bad reign of Kaido. But they have to now face 2 emperors of the sea together!

Finally, some spoilers got released which are shown below. Jinbei is finally back to the Strawhat’s crew, as promised by him! The whole alliance will go towards the port Habu and then invade Onigashima. But they have to defeat enemy ships and Kanjuro first. Also, they have to save Momonosuke (Oden’s son).

One Piece Author Oda’s comment on the global epidemic of Coronavirus- Oda hopes that everyone will be safe so that is why it has taken a break. It will release on April 5 (Author’s comment from the latest Jump issue). Yes, because of the Corona Virus outbreak, Oda has decided to take a break from drawing and is giving all his staff much-needed break from work. Please do not misinterpret this delay and also, understand the current situation the world is in.

One Piece latest Chapter 976 Live Countdown to the next chapter (Time left for the Chapter for every country):

We do not provide unofficial links and Fan translations might get chapter 3 days early, but, always read and support the official release of the manga, it has correct translations. It will just take 10 minutes to read a new chapter.

Read or Watch One Piece 976 Officially

The Anime is behind the Manga and is on Episode 925.

Raw Scan, spoiler leaks confirm that Jinbei joins back Strawhat crew. And everyone is happy to see him back, after all, he made it out alive from Big Mom’s crew earlier. Finally, this adds some huge power to Luffy’s crew, as he is Fishman who even knows Fishman Karate that helped tackle Big Mom earlier. This war is getting interesting as the day closes. Luffy, Law, kid and Luffy’s crew will fight the enemy ships and Kanjuro to get back Momo. 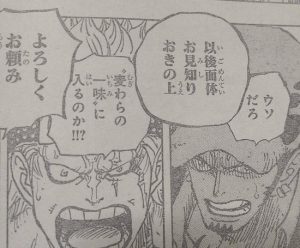 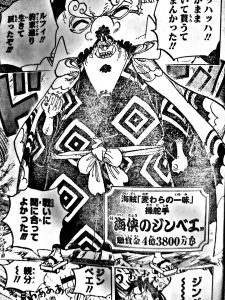 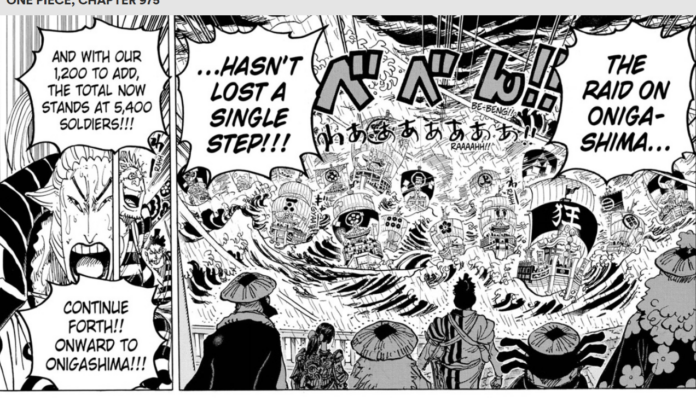 The things mentioned below might probably happen in the manga in the upcoming One Piece Chapter.

Kinemon is the leader of the plan for the Onigashima War Plan!

The last One Piece Chapter 975 featured Kyoshiro revealing his identity to the other scabbard and showing his loyalty to them. He even cleared all the obstacles created by traitor Kanjuro and Orochi.

Now the allied forces have a clear way to approach the Onigashima and end the reign of the wrongdoers. Kinemon really turned out to be more intelligent than we thought.

It took a bit of time and effort to fix the Sunny, but Luffy and co. come rushing in.

Luffy, Law, and Kid go ham and chaos ensue. In the midst of all this chaos, Kyoshiro appears and reveals that he is Denjiro. By gaining the trust of his underlings and Orochi, he’s come as aid together with the samurai that have been released from jail. Upcoming One piece chapter will be more interesting.

Also, the military forces that were thought to have sunk are all safe and it seems only the ships that were not needed were destroyed. The reason for this was because Denjiro thought that Kinemon purposely misread Yasu’s picture puzzle as he (Kinemon) guessed that there was spy/informant amongst them, but it seems Kinemon was simply just mistaken.

Denjiro thinks Kinemon is a genius for misleading everyone knowing that there is a traitor among them but it seems like Kinemon just mistook the image and the distance between the two cuts.

One Piece Confirmed as Top-Selling Manga of 2019

Discuss in the comments below about the One Piece Chapter 976. One Piece manga is still rising, keep giving it support. Also, check about the latest Boruto Chapter 45.