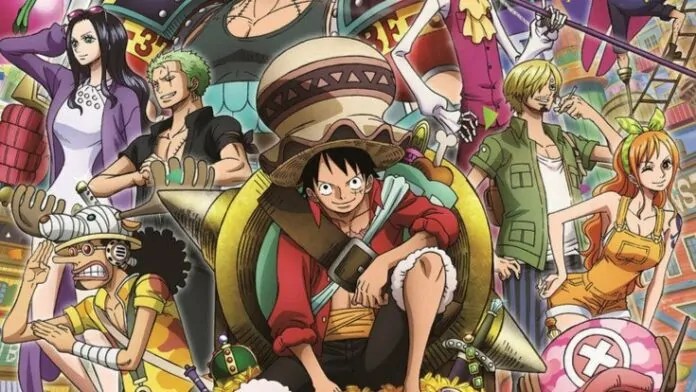 One Piece Stampede anime movie Release in Japanese theaters on August 9 and YonkouProd recently shared the story plot synopsis of the movie.

“The enemy that these gathered powers face is “The worst escapee in all history!!” The CP-0 Shichibukai, Pirates (Specifically Luffy and Law) Navy (Specifically Smoker) and the Revolutionaries will all be featured.

Douglas Bullet used to be a young hero as a soldier but a certain incident caused him to retire. After an encounter with Roger and sailing on his ship, he was more careful with his life but after Roger’s death, his path changed… ”

Takashi Otsuka will direct the film at Toei Animation studio. The One Piece Stampede will be the 14th movie in the movie list and will feature 38 characters designed by author Oda himself.

Written and illustrated by Eiichiro Oda, One Piece is a Japanese manga published Shueisha’s Weekly Shōnen Jump magazine on July 19, 1997, with the chapters collected into 85 tankōbon volumes to date.

Toei Animation premiere the anime show adaptation of the manga in 1999, in Japan. One Piece Manga has the most copies published for the same comic book series by a single author.

The series focuses on Monkey D. Luffy, a young man who, inspired by his childhood idol and powerful pirate “Red-Haired” Shanks, sets off on a journey from the East Blue Sea to find the famed treasure One Piece and proclaim himself the King of the Pirates.

In an effort to organize his own crew, the Straw Hat Pirates, Luffy rescues and befriends a swordsman named Roronoa Zoro, and they head off in search of the One Piece.

They are joined in their journey by Nami, a navigator and thief; Usopp, a sniper and a liar; and Sanji, a womanizing chef.

They acquire a ship named the Going Merry and engage in confrontations with notorious pirates of the East Blue.

As Luffy and his crew set out on their adventures, others join the crew later in the series, including Tony Tony Chopper, a doctor and anthropomorphized reindeer; Nico Robin, an archaeologist and former assassin; Franky, a cyborg shipwright; Brook, a skeletal musician and swordsman; and Jinbe, a Fishman helmsman; and they also acquire a new ship named the Thousand Sunny.