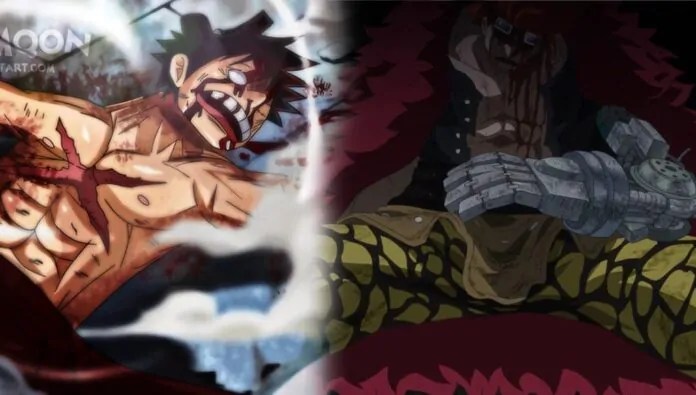 This is One Piece Episode 916 Release Thread for Spoilers, also containing Live Countdown to English Subbed, Leaks, Speculations, Discussion for Luffy vs Kaido. The release date of the One Piece Episode 916 is 5th January 2020. There was a delay until Jan 5 due to the new year holidays in Japan. It will be releasing soon.

What is the One Piece Episode 916 Release Date, Time?

One Piece Episode 916 will release on 5th January 2020. Time left for the release of this Episode is according to the Live Countdown, here is the Exact LIVE Countdown for the upcoming Episode for everyone:

One Piece Episode 915 was a great Episode that showed Kaido’s true power. Finally, it ended with Luffy lying on the floor unconsciously, Kaido got back to his normal form and just gave a single blow to Luffy’s face with his Thunder Bagua, after which our hero Luffy got unconscious. Luffy is left bruised and defeated on the ground. This post contains major spoilers below.

Where to watch Latest One Piece Episode 916 Officially?

Episode Title: “A Living Hell – Luffy, Humiliated in the Great Mine“

Warning these are 100% true and big spoilers from manga, beware.

After getting defeated by Kaido with a single blow from Kaido’s thunder Bagua, Luffy lands up in the great mine which is a kind of jail for Wano’s prisoners, with every prisoner being tied with sea stone collars and cuffs.

At the ruins of Oden’s Castle, the Straw hats and their allies have all survived and Kiku prepares to tell them the current situation. Luffy’s crew hears the news of their captain defeated. Law hardly escaped even after getting a hit by sea stone nail, he tried his maximum but could not save Luffy.

Luffy is later humiliated by the beast pirates in the jail cell and is asked to work in the jail until his ‘will’ breaks and he pledges loyalty to Kaido.

The cell next to Luffy is in which Captain Eustass Kid is placed, they both swear for defeating Kaido. Their will won’t break that easily.

Other Upcoming Episodes: One Piece Episode 917

One Piece Episode 917 will release on 12th January 2020 Officially.

Manga is currently ahead of the story than anime being on Chapter 968th.

Luffy vs Kaido happened, what are your thoughts/opinion about 916, comment down below.