The new Dragon Ball Super Chapter 49 of Manga will air soon, release date being June 20 officially on Viz.com (STATUS RELEASED). We have got some new leaks about the new DBS chapter.

Special thanks to Geekdom101 for the report. Though Dragon Ball Heroes Episode 12 will release on the next day June 22nd. There might be some error in Translations.

Yes, 100%. Talks about a possible next ‘Dragon Ball movie’ and how it might go in a “completely different direction” than Dragon Ball Super Broly based on an interview with the head of the Dragon Ball Rooms: ‘Akio Iyoku’.

We may have an announcement about Dragon Ball Super Anime on July 20th, 2019 on SDCC (San Diego Comic-Con). It will eventually come this year that is for sure.

So, that’s how the new chapter 49 Summary leak goes:

Dragon Ban Super Manga Chapter 49: The Outer Space Battle, Moro is shown to be draining New Namek Planet of its energy while Jeep a. Merus say that they could also be absorbed by Moro if they stay there so they rush to the spaceship in order to get away front the planet.

Rico talks to Este saying that this must be extremely difficult for him. Bea tells Jeep that he made a promise to the Elder Mat he would survive since he was designated to be the next Elder. The previous elder knew that he was going to die, so entrusted everything to Esca. Merus says that the first thing they need to do in order to bring peace back to Narnek is to defeat Moro.

Goku, Vegeta, and the Grand Supreme Kai show up to where Moro is and begin to attack him b. their punches seem to just fly right through him as if he were some sort of phantom.

It is soon revealed that Moro is not actually there, and is somehow gathering the energy from someplace else. Moro soon appears on a rock nearby and Me 3 begin to chase after hirn. Vegeta realized that this is part of Moro’s plan — he and Goku cannot proceed since they are unable to breathe in space so the Grand Supreme Kai goes to fight Moro alone. As Moro and the Grand Supreme Kai fight one another, Moro clearly has the advantage.

The fight eventually leads the 2 away from Goku and Vegeta to a place where they cannot see. While this fight is going on, the energy stops being absorbed from Planet Narnek but Goku and Vegeta are stuck In the planet’s atmosphere so Merus, lam, and the crew of the ship go to pick them up. The fight between Moro and the Grand Supreme Kai rages on.

Moro says that he was surprised at the Strange POWers of the Grand Supreme Kai earlier, but since he’s powered up there are no longer an), issues.

Moro encourages him to try it, saying that In his current. there is no way he has enough power to perform an ability like that, to which the Grand Supreme Kai acknowl.ges his own bluff.

The chapter cuts back Goku and Vegeta who both agree that Moro continues to get stronger and stronger. Soon Meals shows up and they both board the spaceship and begIn to talk about how they can possibly defeat Moro. From here on the chapter gets extremely blurry.

Mews explains how Majin Buu splitting up may have something to do with why the Grand Supreme Kai no longer has enough power to perform the sealing techniques on Moro.

lama seems confused at what this means, and Merus explains that during the battle with Majin Buu, Buu ultimately became 2 separate entities, which even fought against each other: Kid Buu vs. Good Merus also my that he originally had thought that Good Buu had inherited most 11 18. Godly Power of the Grand Supreme Kai, but it might have actually been the evil half. 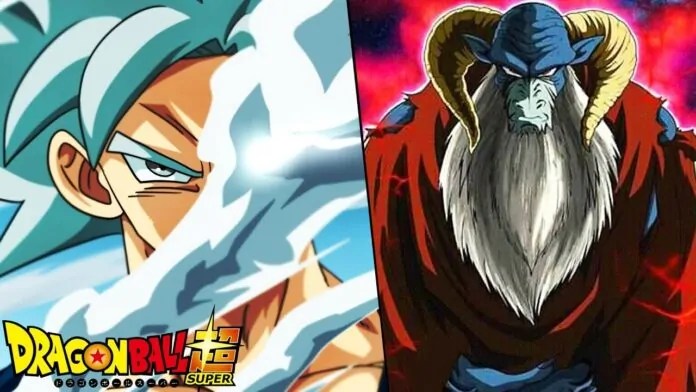 Goku, Vegeta, and the Grand Supreme Kai finally squared, with Moro on Planet Namek, saying that both of them are now at full power and that they will not allow him to run.

Goku and Vegeta are quite confident in their abilities to take on Moro and express that when they speak to Mr. Morro begins to laugh and asks them if they forgot something important.

Goku and Vegeta both look confused but Moro reminds them that he indeed made the third wish from Porunga (Dragon).

Morro’s powers are now fully back, so it would be interesting to see our fighters that is Goku and company will fight a full magical powered Morro. People are really Excited about this Dragon Ball Super Chapter 49.